Penelope Lively, now 89, is a very unusual writer. She was a highly successful children’s novelist, winning The Carnegie Medal for The Ghost of Thomas Kempe in 1973 and the Whitbread Prize for A Stitch in Time in 1976. She is on record as agreeing with WH Auden that “There are good books which are only for adults. There are no good books which are only for children” so she turned to adult fiction. She did brilliantly at that too. In 1987 she won the Booker Prize for Moon Tiger, She then kept them coming. The Road to Lichfield was Booker shortlisted in 1977 as was According to Mark in 1984. In 2012 she became Dame Penelope Lively – and quite right too.

I read Moon Tiger when it was first published (and most of Lively’s books as they’ve appeared over the years since) and had very fond memories of it. And it doesn’t disappoint in 2022. If anything I’ve matured into it in the last 45 years so it seems even better now than it did then.

Claudia, has had a successful career as a journalist and author of history books. She now lies dying in a private room in a London hospital, reflecting on her life. She spent the war reporting from Egypt – and the country is evoked with colourful, convincing realism because Lively grew up there until she was 12.  The period detail is finely done too. The narrative slips from first to third person which is a neat technique because it means we see Claudia from a range of angles – most poignantly from the point of view of the nursing staff who have no idea what’s going on in Claudia’s head and treat her with professional, impersonal kindness, To them she’s just trying old woman, dying.

In Egypt – unbeknown to everyone else who knew/knows her –  Claudia met the love of her life but it is obvious to the reader almost from their first meeting that this is doomed because he doesn’t feature later. And this is an intricate novel full of time shifts. Instead there’s another man, still alive, who comes and goes but clearly isn’t the One, glamorous and prosperous as he is.

Feisty, argumentative Claudia had no talent for motherhood and doesn’t really know or understand her only daughter who dutifully now comes to the hospital. Also in the background is Claudia’s very close, borderline incestuous relationship with her late  brother Gordon whose insipid widow also visits her regularly. Then there’s Laszlo, the teenage Hungarian refugee she befriended in 1956 who becomes effectively part of her family although he’s resented by Lisa, her daughter.

It’s obvious from the first page of this lovely novel what has to happen on the last, although there’s an eleventh hour development which I’d forgotten.  What’s in the middle is a riveting love story and immaculate portrait of a complex woman. Reacquainting myself with Moon Tiger has left me with a thirst to reread all Lively’s other books. Reading is a never ending journey isn’t it? 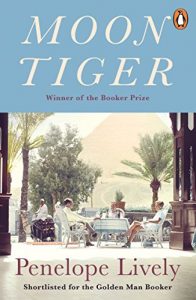 Next week on Susan’s Bookshelves: Orlando by Virginia Woolf