I remember it with such clarity. I spotted this book one winter evening in the Rainham Bookshop on my way home from my Head of English job at Walderslade High School for Girls (Kent) when I was picking up sale-or-return books for a school book fair. I bought it – for myself –  little knowing what a lifelong treasure it would turn out to be. It was first published in 1984 and that must have been 1985 or 1986. I’ve read/used it every Christmas for over 35 years. This year I have reread every single story. And it’s been a journey of delight.

How well Dennis Pepper, who compiled it, chose his material. My favourite Christmas story of all time is The Gift by Hugh Oliver. It’s just two and a half pages and about a couple whose first child is being born on a snowy night on the Canadian Prairie. I’ve read it aloud many times in assemblies and to individual children. I’ve seen children (and adults) in tears at the halfway point and lost in puzzled wonderment at the end. But I’m not going to spoil it here. 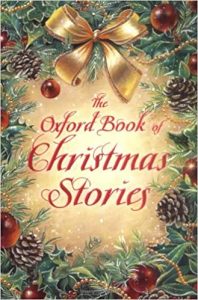 In a totally different mood and mode, in this collection, is an early Jacqueline Wilson story written long before she became the famed Dame she is today. She tells the story of Jesus’s birth as a first person narrative from Mary’s point of view.  Whatever your religious views or beliefs, have you ever thought – really thought – about how it would feel to be a terrified teenager, a long way from home and her mother, giving birth to a first child in a filthy stable? Well Wilson makes sure you do as well as highlighting the surreal wonder of the nativity story.

Then we get Mr Pickwick going skating and making a mess of it, a bit of Adrian Mole, a Philippa Pearce story about a Christmas pudding which haunts the basement of a Victorian house, a strange vampire story from Robert Swindells and much, much more. There are thirty stories in this fine book –  some serious, some tinselly but all seasonally thoughtful.

Although there were, over the years, several editions with different covers, it would seem that Oxford has now foolishly allowed this lovely book to go out of print. The good news is that there are lots of copies available via companies such as Ebay and Abe Books. I warmly advise you to snap one up for this Christmas and for Christmases yet to come.

As an extra bonus, carefully tucked inside my copy is a 2007 cutting from The Times. It’s a beautiful story about angels and animals told with all Jeanette Winterson’s wit and flair. And the good news is that it is published in Jeanette Winterston’s Christmas Days (2016) which is still very much in print. 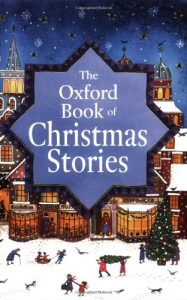