Susan’s Bookshelves: A Question of Upbringing by Anthony Powell

There are two series of books I’ve always intended to read one day (unlike Lord of the Rings which I decided long ago I wasn’t going to trouble myself with.) One is Marcel Proust’s  A la Temps Perdu – roughly translated as In Search of Lost Time – and the other is Anthony Powell’s Dance to the Music of Time. Projects comfortably postponed to extreme old age when I might not be able to get out much? Perhaps not. When a dear friend was dying of cancer a few years ago she said: “You always think that when you get some hideous wasting disease you will read Proust and Powell  but then when it comes, the morphine means you can’t concentrate for five minutes so you don’t”. 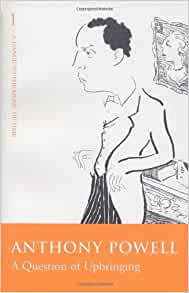 So with that thought in mind – and with my health and faculties happily intact –  I have now read the first novel in Powell’s opus magnum: A Question of Upbringing which was published in 1951.  As well as the obvious whiff of Brideshead, it reminds me of Jane Austen without most of the wit, spliced with CP Snow whose first novel in the Strangers and Brothers series was published, eleven years earlier in 1940 – and I have read all the latter several times because I wrote a college dissertation on Snow when I was 21.

Three young men: narrator Nicholas Jenkins, Peter Templer and Charles Stringham are at an Eton-like school in the 1920s where they try to avoid the strictures of the house, whose master is bloodless man named Le Bas. Also around is another boy Kenneth Widmerpool. Eventually Jenkins and Stringham “go up to the university” as entitlement to Oxford is referred to. They visit each other’s families, Jenkins spends one summer in France to improve his French and they are taken under the wing of a don named Sillery. Everyone knows everyone else in these privileged circles and it’s odd, I am writing this on the day when I heard comedian/actor/writer Katy Brand talking to Michael Berkley on Radio 3’s Private Passions. She said  that, going to Oxford in the 1990s from a comprehensive school she found this clubbiness based on long established ties quite hard to adjust to. And that was 40 years after the publication of this novel and 70 years after it was set. Is it different now?

The novel is really a comedy of manners in which people fence round each other especially where mothers, sisters and female companions are concerned. And as they’re sometimes staying in disparate groups in large houses waited on by servants it was that which reminded me of Jane Austen although her point of view is always waspishly feminine and Powell’s Jenkins is unapologetically male. The story about picking up two girls from the roadside in Templer’s car which he then crashes, for example, is all about men and their reactions.

It was the university lunches and political manoeuvring and manipulation which screamed CP Snow at me – such a closed world concerning itself obsessively with things which don’t in the scheme of things matter much although there’s romance in all those courtyards, stairways and shabby rooms. And I enjoyed Moffet, Stringham’s college servant, who insists on lining the latter’s ivory elephants up the wrong way.

I’m not sure whether I shall plough on with the other eleven novels in Dance to the Music of Time which span the rest of the century – I probably will at some point because I’m curious to see where it goes. Proust meanwhile is surging his way up my TBR list. 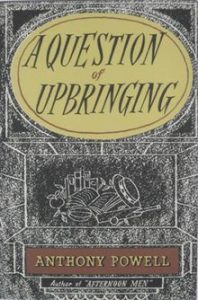 Next week on Susan’s Bookshelves: Lolita by Vladimir Nabokov