Walking with my sister recently, we bought takeaway cuppas in a waterside coffee shop to sustain us for the return route. On the shelf of donate-for-charity books by the counter was a pristine copy of The Salt Path by Raynor Winn (2018) which I hadn’t heard of at the time although it’s actually a runaway best seller. “You should read that” my sister said. “It’s really good both on adversity and on the South West Coast Path”. So we put something in the RNIB box and I took the book.

And I’m very glad I did because it’s the most uplifting book I have read in a very long time. Raynor Winn’s husband, Moth, has just been diagnosed with a  terminal illness; corticobasal degeneration (CBD) which is similar to Parkinson’s Disease. And, though error and misfortune, they are suddenly homeless and penniless in their fifties. It could very easily be yet another misery memoir. In fact it’s anything but.

Rather than demanding a council house or throwing themselves on the mercy of friends they decide,  very much against doctor’s advice, to attempt the 630 mile South West Coast Path with two backpacks and a flimsy tent. It’s an utterly bonkers decision by any standards but it turns out to be the making of them. They start at Minehead and walk westward, using Paddy Dillon’s book The South West Coast Path as their guide although she constantly jokes against themselves that they rarely achieve anything like his daily mileage.

There are many moments of cold, hunger and anxiety but rarely despair and she is very wryly funny about the characters they meet on the path – especially the young bouncy ones with their expensive equipment who won’t believe how far “the old backpackers” have come. It’s an account of both endurance and determination constantly dogged by, literally, having to count every penny. How many times on the journey did they ask for free hot water and then put their own teabag in it?

In many ways the “hero” of this inspiring memoir is the coast path itself as it winds along the rugged coast of north Somerset, Devon and Cornwall and then – via wet, windy, misty Lands End and The Lizard eastwards towards Dorset. In fact they stopped in south Cornwall and went to live and work on a friend’s farm in another part of the country for a few months. When they returned to walk the last few hundred miles (in the opposite direction) from Poole, it feels like a homecoming. On one level this is a travel book (think Bill Bryson’s A Walk in the Woods or Tom Chesshyre’s From Source to Sea) and will probably inspire many people to explore the South West Coast Path especially this year when opportunities to travel abroad seem pretty uncertain.

But The Salt Path is much more than that. This is about two people – who’ve been in love since their teens – striving together to find a way of moving forward under almost unimaginably difficult circumstances.  The underlying love story is what will stay with me, longest I think. This is definitely a happy book not a sad book.

Raynor Winn is now a regular long distance walker who writes about nature and homelessness. I shall soon read her second book The Wild Silence (2020) to find out more about her life before and after her astonishing walk. Such is the immediacy and openness of her writing that  she now feels now like an old friend  with whom I want to catch up. 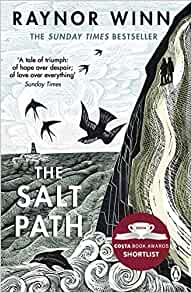 Next week on Susan’s Bookshelves: Blackberry and Wild Rose by Sonia Velton