I don’t know how many times I’ve read Silas Marner (1861). I adored it when I first read it at college and it seems to be a life long passion. I used to teach it sometimes too and often recommended students to read it as a companion piece to Michelle Magorian’s very popular Goodnight Mr Tom (1981)  with which it has so much in common. I’ve watched Giles Foster’s BBC TV adaptation (Ben Kingsley, Patsy Kensit, Jenny Agutter, Angela Pleasence, Patrick Ryecart), often with English classes,  more times than you could shake a stick at too.

So what is it about this little novel – short by Victorian standards – which leaves me uplifted and makes me weep every single time I go back to it? I think it’s two things. First it’s a very hopeful, ultimately upbeat, novel about redemption. Second, apart from Dunsey Cass, who’s an extremely nasty amoral type and Silas’s “friend” at chapel, every single character is a fully rounded mixture of good, bad, misguided, kind, thoughtless and all things in between. It’s also an interesting study of the early years of the nineteenth century when manufacturing was moving away from individuals and into big factories in cities. At this time Raveloe is still plausibly a self contained village, in every sense a long way from city life, but times are changing quickly.

Silas, the titular Weaver of Raveloe, is wrongly accused of theft by the minority religious sect he belongs to in the Midlands town of his birth. So, devastated and broken, he leaves and ends up in Raveloe, a reclusive miser in a cottage on the edge of the village. He weaves cloth for villagers and spends almost nothing. Then his beloved money is stolen and soon after he finds a golden-haired toddler who has wandered into his cottage. He sees the latter as a substitute for the former, takes little Eppie to his heart and raises her as his daughter. All this is inextricably tied up with doings and dealings at the Red House, home of the local landowning Cass family … but I won’t spoil this wonderful story for you.

George Eliot (real name: Mary Ann Evans) is an intelligent story teller. Virginia Woolf famously declared that Middlemarch is one of the few English novels written for grown up people. She gives us, for instance, a couple of fabulous “chorus” scenes at the Rainbow where Raveloe men congregate to set the world, or at least their bit of it, to rights. She hooks the different bits of the narrative together neatly too so that when the reason for Dunsey’s absence is eventually revealed the reader is as surprised as the people of Raveloe although we know a bit more than they do. At one point we are hearing, in turn, about Silas’s life, everyday activity (or lack of it) at the Red House and about what a certain pitifully inebriated, drug addicted woman is doing in the nearest town. Then it all comes together.

There’s a lot of love in Silas Marner. And in the end it triumphs gloriously. I have tears welling again, just thinking about it.

Next week on Susan’s Bookshelves: A Farewell to Arms by Ernest Hemingway 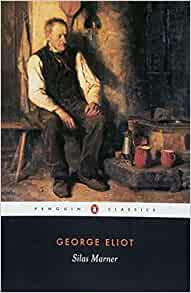