I’ve never made any secret of my view that my CertEd teacher training course at Bishop Otter College, Chichester (1965-8) was not fit for purpose. But it did have its moments – occasionally. One of these fell in my second year when they invited in three Sussex-based writers of children’s books in to talk to us about literature for children. The three were Rosemary Sutcliffe, Brian Wildsmith and Ian Serrallier. I was riveted. Soon after, a group of us who were musically inclined were asked to go weekly for half a term to Singleton Primary School to help teach the children a cantata written for them by Ian Serraillier who lived in the village.

A year later found me floundering in a Deptford boys secondary school (see my memoir Please Miss We’re Boys, Book Guild, 2019) which was a bit – ahem – different from rural Sussex.  But in the English Department stock cupboard I found a familiar name: Ian Serraillier. I seized upon The Silver Sword to read with my own first year (year 7) English classes. From that point on I probably read it twenty or thirty times because, a popular text, it was in other schools I taught in later too.

At Christmas just gone my niece, who teaches Year 5, told me that she was about to embark on a World War 2 project. She’d been recommended to The Silver Sword. Did I know it? It led to a bit of a brainstorming session between her and me about what else she might also use and left me yearning to reread my old favourite – which I have now done. 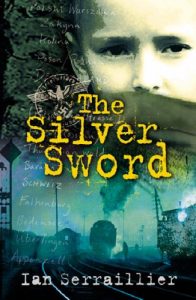 The new copy I bought includes an afterword from Ian Serraillier’s daughter, Jane Serraillier Grossfeld from which I learned several things I didn’t know. For example, he was a pacifist and an officially registered conscientious object during the war who did Air Raid Precautions work, lent his car to the Friends Ambulance Unit and went on teaching English. As a student he had travelled and camped along the route which features in The Silver Sword so he knew the area well.

Written in 1956, The Silver Sword is a gentle book of its time – the background issues are horrific but Serraillier focuses for the most part on kindness and decency. A family in Nazi-occupied Warsaw is split up in the middle of the war: the teacher father is sent to prison for refusing to have Hitler’s face on his classroom wall and the mother is arrested and sent to Germany as a land slave. The three children avoid being blown up in the house by escaping over the roofs. Later they team up with Jan who, by chance, has met their father. The Russian army liberates Warsaw and, after a couple of years of living in the cellar of a bombsite, they set off to Switzerland where they believe they might be reunited with their parents. Thereafter it’s a quest story with episodes en route such as meeting a friendly English Officer in Berlin and a kindly farmer named Wolff in Bavaria. The titular silver sword is a paper knife which once belonged to the children’s mother. Found by Janin the rubble,  it becomes a symbol of hope.

The tension is tautly done – at one point they have to negotiate a river with rapids in canoes and they very nearly don’t make it across Lake Constance. And of course, not everyone they meet is sympathetic. The Burgomaster, for example, is tasked with the job of rounding up Polish refugees and sending them back to Poland, regardless of their stories. And the middle child, Edek who – captured by the Nazis, spent two years in Germany slaving on the land while his sisters lived in the Warsaw cellar – has tuberculosis and is seriously ill so his condition is, in a sense, another enemy.

But the best thing is the characterisation. Jan is a ragamuffin, parentless thief who has a gift with animals. Until he gradually learns to trust and respect Ruth and begins very slowly to trust her, he is a loose cannon but oh such fun and so likeable. Ruth is fifteen when she becomes the family’s quasi mother and for a very long time shoulders the responsibility with extraordinary maturity – driven by the Christian values instilled by her parents. 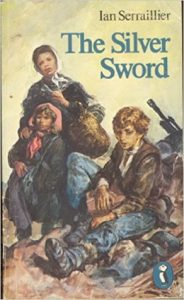 Modern children might be puzzled about where everyone went to the loo in a crowded train truck on a nine day journey to Berlin – and a 21st century novelist would probably tell them.  It’s a bit odd that the older ones can and do sometimes still carry Bronia  when she’s six years old. Nobody ever swears.  And there are other details which now seem a bit quaint but they matter very little. This is still a very heart warming tale from which today’s children will learn much about what happened in Europe during and after the war. It’s still topical too. In 2022 there are unaccompanied child refugees travelling in dangerous conditions across Europe in search of a better life. And yes I could never read the last few pages aloud in class without an audible lump in my throat. Even reading it now alone and silently I got something in my eye which is good going for a book now 66 years old – and as familiar as a favourite old coat.

Next week on Susan’s Bookshelves: Return of the Native by Thomas Hardy