Susan’s Bookshelves: The Swift and the Harrier by Minette Walters

I used to read a lot of Minette Walters’s crime thrillers and have fond memories of, for example, The Scold’s Bridle and The Sculptress. Then she took, largely, to historical fiction and I got out of the Walters habit. Time to put that right. The Swift and the Harrier is her latest, published early this month. I really liked it, learned a lot and very much enjoyed the characterisation. Moreover it is set in Dorset where the author lives and that’s an added bonus. I have ancestral connections with Dorset and love it to bits.

Civil war has just broken out and Walters is very good at the tensions between families and the cavernous rifts caused by the outbreak of hostilities between Parliament and the King in 1649. I once did a whole year’s university course on the 17th century and I know Dorset pretty well but I had never come across the siege of Lyme Regis so that was a pretty fascinating learning curve.

At the heart of the novel is Jayne Swift, daughter of a knight so landed but definitely not nobility. Against all the norms of her social class and upbringing, but with the reserved blessing of her parents, she has studied “progressive” medicine and practises as a doctor although, as a woman, she cannot have the university-granted title. She totally rejects Galen’s fifth century theory of humours: blood, yellow bile, black bile and phlegm – still the established medical view in mid 17th century. Instead she uses observation, clean bandages, herbs such as valerian and fresh-air based hygiene and her success rate is quite high. She is open to new ideas too – such as a pain killing drug called laudanum (by interference the beginning of the use of opiates) or the practice of treating gangarene effectively with maggots. Determined to be neutral in the hostilities she treats injured people from both sides.

She is, obviously, the Swift of the title. We have to wait a while for the Harrier to emerge and when he does he comes in a whole range of personae and it’s a long time (the novel covers several years) before she, and the reader, works out how trustworthy he is (or not). These are, after all, dangerous times of intrigue and no one really knows what anyone else believes or will do. I loved the honest repartee between them. Jayne is fiercely intelligent and independent – how plausible her character really is for these times, I don’t know but it’s an entertaining, educative read with a healthy twist of feminism. 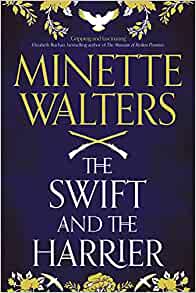 Next week on Susan’s Bookshelves: The land Where Lemons Grow by Helena Attlee