Susan’s Bookshelves: Tess of the D’Urbervilles by Thomas Hardy

When the teenaged me first read Tess of the D’Urbervilles she emerged from it fizzing with fury. She wanted to yank hypocritical, cruel Angel Clare from the pages of fiction and sock him in his pretentious face. For that matter she’d have told dim, misguided Mrs Durbeyfield a thing or two as well. And as for Tess’s feckless father well, he wouldn’t have got off lightly either. Even longsuffering, pretty Tess would have come in for a shaking. Does she really have to be quite so passive and accepting – until she finally flips that is?

Many more mature readings since have made me realise that I was, of course, reacting in exactly the way Hardy wanted me to. His 1891 novel was a deliberate challenge to the old Victorian morality which conventionally demanded purity of women in thought, word and deed but which allowed men to do what they liked and to snatch their pleasures where they fancied. Double standards and all that. Of course, in practice, it was usually more nuanced than that but I’ve summarised the prevailing attitude pretty accurately, I think.

There’s no doubt it’s Tess, his heroine, that Hardy wants us to sympathise with – fornicator, adultress and murderer that she technically is. There can be few people in fiction “more sinned against than sinning” apart from King Lear, maybe.  Five years later Hardy went even further with Jude the Obscure (1896) which suggests that it’s possible for an unmarried couple to live together happily and unpunished. The public reaction to such condoned “immorality” was such that he vowed to write no more novels. Thereafter (and he lived until 1928) he wrote only poetry thus becoming a nineteenth century novelist but a twentieth century poet and that’s probably unique.

Back to Tess. In short, for anyone who hasn’t read it or has forgotten the plot: Tess, a farm worker’s daughter, is seduced by  sophisticated Alec Stoke-Durberville who’s a proper old fashioned cad with phallic cigar and a habit of pressing strawberries into Tess’s mouth. She eventually cuts loose and goes home where the inevitable consequence follows. When the baby dies, the local clergyman refuses to bury him in consecrated ground, thereby becoming another character I took strong exception to when I was 15. She takes a job on a dairy farm where she meets a clergyman’s son, Angel Clare, a sort of drop-out, who’s training to farm rather than heading to university. Eventually, after their marriage she confesses the truth about her past and, although he has told her of a regretted weekend of debauchery of his own, he is horrified by her story and insists on separation which may or may not be permanent. Thereafter Tess’s situation goes from bad to worse and Alec keeps appearing. Utterly desperate now that her mother and siblings are homeless in the end she succumbs and goes to live with Alec at a hotel in Sandbourne where the contrite (sort of) Angel traces her. And that’s what pushes her over the edge so that she signs her own death warrant.

Well, this may not be the conventional view but it struck me afresh yet again when I reread Tess recently, that I have a lot more time for Alec than for Angel. Again and again he offers to support her struggling family – yes, of course, that’s only because he wants Tess back but Angel never does anything to help them in any way. Alec takes dastardly advantage of Tess at the beginning but he doesn’t treat her with the cruelty that Angel does. And I’ve never read the novel without being really annoyed that at the end Angel saunters off, scot-free with Tess’s younger sister.

Read it again and see what you think. Don’t be distracted by Roman Polanski’s 1979 film. The plot is reasonably true to the novel in an abridged way but the setting grates terribly. Polanski, was (and is) persona non grata in Britain, following his flight from the US criminal justice system two years earlier, so the film had to be made in France. It doesn’t look remotely like Dorset and the mock up of Stone Henge is a travesty. 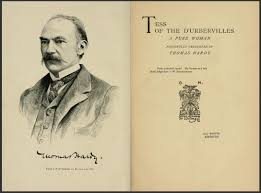 Next week on Susan’s Bookshelves: The Thornbirds by Colleen McCullough