I’ve just finished it. Again. That must have been my ninth or tenth reading of Wuthering Heights and it still got right under my skin. It really is an extraordinarily powerful novel – and unique. It’s now 173 years since it was published in 1848 but that just falls away almost from the first paragraph because it’s so fast paced that it doesn’t feel like a nineteenth century novel. One is left wondering what on earth Emily Bronte would have gone on to achieve if she hadn’t died of tuberculosis in December 1948, aged 30.

The structure is complex and ambitious but neat – we begin and end with H and C Earnshaw at Wuthering Heights. The self-obsessed, “entitled” Lockwood is the main narrator but that’s almost a framing device. The main narrator is housekeeper Nellie Dean who grows up with the (first) Earnshaws and is much more part of the family than a servant. She is effectively mother to several characters and sister to others. Nellie’s narrative is punctuated with accounts told her by other people and by the occasional letter. In anyone else’s hands it might be clumsy but Bronte carries it off in spades.

Heathcliff is the adopted son of Mr and Mrs Earnshaw and grows up with their son Hindley, who loathes him, and Catherine who loves him passionately. Hareton dismisses Heathcliff as soon as the older Earnshaws are dead and Catherine marries Edgar Linton at nearby Thrushcross Grange but Heathcliff returns three years later to find his beloved pregnant and dying. Heathcliff cheats the now widowed and feckless Hindley out of the ownership of Wuthering Heights and brutalises the latter’s son, Hareton. Heathcliff meanwhile has married and abused Edgar’s sister Isabella who takes their son away to the south. After her death her son, the physically and mentally week Linton, is brought back to Wuthering Heights and married, almost by force, to the younger Cathy. This, through iffy wills and so forth, eventually gives Heathcliff the ownership of Thrushcross Grange as well as of Wuthering Heights.  Finally Heathcliff dies and Cathy and Hareton marry freely.

That banal summary is a travesty but it might help if you’re new to Wuthering Heights. I used to tell my students that it’s a novel which needs reading quickly so that you don’t lose track of the narrative method or who the characters are, given the duplication of names.

Several things stuck me afresh on this latest reread. Who exactly is Heathcliff? Why on earth does Mr Earnshaw walk 60 miles (60 miles!) home from a Liverpool business trip  with a wriggling toddler under his coat? We’re told repeatedly that Heathcliff is physically (as well as figuratively) “dark”. I’ve always assumed he is mixed race which would have made him pretty exotic in rural Yorkshire in the late 18th century – it’s a historical novel set back 50 years. If so, does Mr Earnshaw really see him sitting on the harbour and take pity on him? More likely, surely, that he is the child of a black mistress (or prostitute) so that Earnshaw feels responsible. It would explain the latter’s fondness for the child. It would also mean that Catherine is Heathcliff’s half sister and complicate things still further.

A lot of ink has been devoted to debating whether or not the relationship between Heathcliff and Catherine is ever consummated – other than after death by melting into each other through the sides of their open coffins. I found myself wondering again this time. There is no textual evidence. It’s a case of draw your own conclusion. They certainly spend a lot of time alone together but the usual Victorian signal is a child and there isn’t one although both have children in other relationships – he with Francis and she with Edgar.

Note too (if I’ve persuaded you to read or reread it) that this is a novel about outsiders and insiders in which windows have massive symbolic significance. The ghost Catherine famously terrifies Lockwood trying to come through the window at the beginning. Children look through windows. People who are shut in look despairingly out of them. Windows (casements, lattices etc) are continually referred to.

Wuthering Heights is in a long tradition of novels named for houses in which the house itself becomes a almost another character: Mansfield Park, Bleak House, Howards End and The Dutch House are other examples. The wind in the trees rattling the doors and windows and the evocative darkness of the setting are part of what makes Wuthering Heights the punch between the eyes that it is.

There’s nothing remotely pretty about this novel. Many people, particularly children, are treated with hideous, mindless cruelty. But, by golly, it’s an arresting page turner. 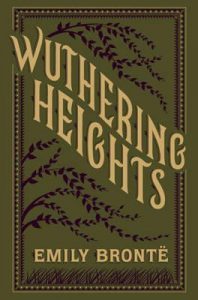