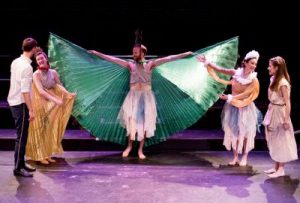 In Shakespeare’s time actors were given their parts to learn – with cues. They were not issued with a copy of the whole play. This was mainly to stop them – long before copyright legislation – selling the text to a rival company as a lucrative sideline. It would have made for some lively improvisation and imaginative acting given that to start with, at least, an actor would have arrived at the performance of a scene without even knowing in advance how many characters were onstage or what was going on in the plot.

Interestingly, this situation is what The Salon: Collective, directed by the highly talented Lizzie Conrad Hughes who also plays Prospero, has tried to reproduce. Its cast have worked from parts only – with cues. Of course it doesn’t completely work in the 21st Century partly because some of these actors will undoubtedly have studied or worked on The Tempest in the past and already know the play pretty well. Secondly, they obviously get more familiar with it at each successive performance so that, as time goes on, there are ever fewer surprises for the actors. Nonetheless you can hear the quality of the listening as actors bounce off each other.

It is certainly a fresh production with some impressive verse speaking and crystal clear story telling. It’s also surprisingly funny. Although The Tempest is a comedy in the sense that no one dies and it isn’t a tragedy it isn’t usually a barrel of laughs. This version – with the occasional insertion of a modern line – is intelligently witty. I like the feminist take too – the dynamic of the relationship between the controlling Prospero and Miranda (Laurie Stevens) is quite different when they are mother and daughter rather than father and daughter. Ariel is also played by a woman (Eugenia Low) as are both Alonso (Geraldine Brennan) and Gonzalo (Angela Harvey). And it isn’t “gender blind casting” The roles are re-worked as female and there’s a strong sense of the women being in charge. Another plus is that the masques in Act 4 – I usually breathe a sigh of relief when they’re cut – are actually sparky fun in this production so that you’re sorry when they’re over.

Conrad Hughes is by turns ruthless, kind, thoughtful, angry, rueful, amused, forgetful, dicatorial and much more. It’s a fully rounded and impressive central performance. Laurie Stevens gives Miranda the right blend of attractive innocence and youthful lust and Eugenia Low manages to create a compelling blend of light other worldliness and physical solidity in Ariel. I could, personally, have done without the curious ticking which preceded her magic spell entries – too reminiscent of the crocodile in Peter Pan – but it’s a small point.

Lawrence Carmichael’s growling, panting Caliban – somewhere between the Elephant Man and Frankenstein’s monster – develops well into a vulnerable but manipulative human being. Matthew Williams is very watchable as the exploitative, mostly drunk, Stefano.

One of the distinguishing features of this take on The Tempest is the inclusion of a prompt who is peripherally part of the action. She presents a verse prologue and epilogue (the latter is completely uneccessary “No epilogue I pray you; for your play needs no excuse” as Shakespeare makes Theseus say in a different play) and then sits visibly “on book”. Actors often call, in an in-role tone of voice, for their lines. It’s a seamless, entertaining process and an interesting reflection on how things must have been in the early 1600s. The proper folksy jig at the end works well though. Not all these actors can dance well but enthusiasm carries the day.