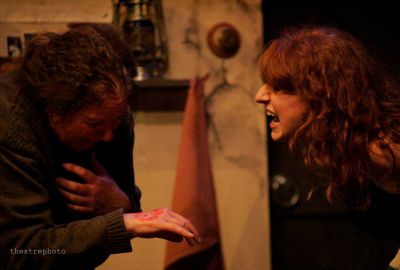 Listening is the key to good acting. The best actors listen to each other and respond with convincing spontaneity and truth. It is very rare to see non-professionals who understand this fully and practise it effectively. All four actors in this outstanding show are high-quality listeners and the result is a very fine piece of drama with acting that bears comparison with the best professional work.

It’s also an excellent play. Martin McDonagh’s 1996 piece takes us to Connemara in Galway where brittle, angry 40-year-old Maureen (Cheryl Mumford) is caring – sort of – for her unpleasant, manipulative elderly mother (Tracey Parvin). Two local brothers played by Christy Hinchliffe and Larry Dobin are neighbours. McDonagh builds the tension until Maureen finally snaps with devastating consequences – there were two moments so powerful that I actually had to look away and that rarely happens to me in non professional shows.

Tracey Parvin shuffles about malevolently or sits issuing orders from her rocking chair. She variously looks and sounds sly, pitiful, anxious, scheming, frightened and isn’t quite as infirm as she pretends. At one point she screams and cries in real terror. Her character is awful but she isn’t a villain and there are moments when Parvin makes sure we pity her as well as loathe her. It’s a very intelligently sustained performance.

Cheryl Mumford is terrific as desperate Maureen. She is trapped with a very unpleasant old woman and it soon becomes clear that her mental health is questionable. When Larry Dobin’s character shows a real interest in her she wants to grab the chance with both hands but is frustrated in every sense of the word. Mumford conveys every possible emotion during the course of the play from anger to resignation, from cynicism to passion and from ruthlessness to despair. She is very impressive indeed.

Both the men are good too although their roles are smaller. Parvin is moving when he writes a letter which acts as a monologue from his London digs at the beginning of Act 2 and powerfully troubled when he sees at first hand the situation in Maureen’s home and gets breakfast for her mother. Parvin ensures that you can see his character’s thoughts. Christy Hinchliffe is especially strong in the final scene as he reacts strongly to what Maureen is saying – and not saying. There’s a lot of screw turning in this scene and both actors contol it well.

The set (designed by Tim Hinchliffe) which consists of a very basic, rural kitchen with curtains instead of cupboard doors works well because there’a lot of food-related stage business. And the triangular playing space sits neatly on the Whitstable Playhouse stage leaving a corner to act as the London digs for the only scene which takes place elsewhere. The other thing which deserves a plaudit is the way all four actors manage the broad Irish accents required by McDonagh’s script with its Irish syntax. It takes a lot of practice and this quartet are convincing and clear.

If I were awarding stars this excellent show would get the maximum number. The Lindley players always achieve a high standard but this production is in a different league.

The Beauty Queen of Leenane