My father, Ken Hillyer, was an accomplished folk fiddler and ceilidh band leader. He formed a group called the Southerners, the other members of which became almost part of the family.  They played for dances continually in the 1960s and 70s, made records, went on radio and TV and occasionally toured abroad. (And that wasn’t even his day job!) Inevitably as we grew up, my sister and I, who both had violin lessons at school, got peripherally caught up in all this and sometimes played with our Dad and his band. I taught myself guitar and sang solo folk songs at related gigs too. (Just don’t ask me to do that now!)  British folk music, we often say, is in our blood. My sister, interestingly, has returned to our roots and now plays for a local morris team. I cheer her on occasionally but simply don’t have time to do it myself at present although she and I often play classical music together.

Well, all  those memories came flooding back last week when I reviewed Once at Fairfield Halls in Croydon at the start of its big national tour. The hugely enjoyable show, based on John Carney’s film, is a love story about music making and set in Dublin. The 19 strong cast – every one of them a competent musician and some, including four violinists, very good indeed – were jamming trad stuff on stage as the audience found seats and I was so transfixed by the energy, vibrance, excitement and familiarity of it all that I sat mesmerised and forgot to get my notebook and pen out.

Once the show begins, Peter Rowe’s direction allows the music and musicians to become almost part of the set sitting at the sides and back, playing continuo or interjections and then occasionally, quite literally, moving into the spotlight. There’s unusual beauty and elegance in such seamlessness.

Watch out, in particular, for Hannah Khogali, fresh from GSMD. How many actors do you know who can play the violin, sing and jump up and down in rhythm all at the same time? And she does it with arresting energetic aplomb. She looks as if she’s enjoying every moment and perhaps she is. It’s jolly infectious.

Towards the end of the second act there’s a number in which the whole cast sings an unaccompanied number in harmony. Goodness knows how they keep it together as tightly as they do but “When you’re staring out to sea” sung at dawn as they look towards Dublin is perfect. Yes, I’ve done an awful lot of choral singing too and I was lost in admiration for the quality of this moment.

I loved Once, and  gave it a rare five stars. I have already recommended to several people that they pick it up on tour, not least because the music spoke to me so personally. Life really does go round in circles. 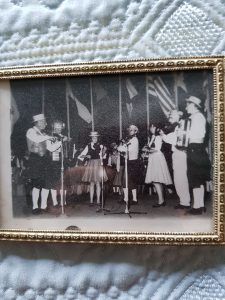 International folk festival on Levkas, Greece in 1966. Me with guitar, my sister in hat and our father on far left.