Puccini’s 1887 masterpiece was, of course, meant for the big stage, initially at Theatre de la Porte at St Martin in Paris but, 140 years later, it really does work in an intimate, almost televisual space too.

The Kings Head theatre, Islington, London’s first modern times pub theatre and open since 1970, accommodates this bijoux, two hour, four hander version very naturally. We – just over a hundred of us – are seated in the round and some of the action spills into the audience space. The rough brick walls and subterranean atmosphere (although actually the venue’s at street level) intensifies the drama. This production, which sets the action in Paris under the Nazis, is in very accessible, modern English by Becca Marriott who sings Tosca and Adam Spreadbury Maher who also directs. 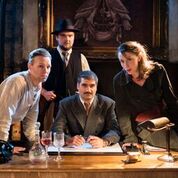 There is top notch work from Michael Georgiou as Scarpia (role sharing with Przemyslaw Baranek at other performances). He is depicted as a plain clothes, senior Nazi. He is good looking, reasonable, plausible and ruthless – with a fine baritone voice – as he sends Cavaradain, also known as Marius, to torture and tries to trick Tosca into having sex with him.  In the act 2 scene in which she sings Vissi d’arte (with terrific passion and beautiful vocal control), translated here as “Love and music are all I live for”, he circles her, touching and tasting her. It’s rivetingly revolting and theatrically very effective. Georgiou is an actor who can communicate simply by twitching his lips.

Becca Marriott has an intensely expressive face and brings real depth to the hapless Tosca. Roger Paterson (role sharing with Martin Lindau) finds plenty of range in the tenor Marius although I found his voice practical and accurate rather than attractive. Thomas Isherwood, on the other hand, as Jacob Cohen and as Scarpia’s side kick (the only role which is not shared) has a splendid bass voice which resonates with great power in this tiny space – especially when he’s in duet with Georgiou. He too is a strong actor, particularly as the terrified Cohen.

All in all it’s a well thought out, scaled down take on a familiar piece. And it’s fascinating to hear Pucinni’s big score successfully arranged for a three piece orchestra: piano, clarinet/bass clarinet and cello. Between them these three instruments catch every musical nuance.

This Tosca is part of an opera tradition at The Kings Head although, in a sense, it will be the last because Kings Head Theatre is moving out of the pub into nearby purpose built premises next year. Meanwhile its 2016 production of La Boheme is to be revived at Trafalgar Studios from 6 December 2017 to 6 January 2018.