Are you trained to act on screen?

Drama schools are still accused of having their heads stuck in theatrical clouds so that their graduates leave college with little idea or experience of how to adapt acting technique for film or TV.

Actually it isn’t a fair accusation any more. Most schools now try very hard to split their curriculum so that students get a breadth of acting training including film. Many of them ensure that their grads leave with decent showreels too. But nonetheless, in some cases, the focus still tends to be more heavily on stage acting which is – in this diverse industry – likely to be the minority of a successful actor’s work rather than its mainstay. So there’s definitely room for a how-to book such as Michael Bray’s So You Want to Act on Screen (Nick Hern Bools, 2019).

Bray trained at RADA and worked as an actor on stage and screen before moving into writing and directing for TV and fim. He has taught screen acting at a number of drama schools, including GSA and ArtsEd and directed hundreds of showreels. In short he knows what he’s talking about.

He divides his very practical, accessible book into two halves: The Process and the The Practice. He sees the former as coming down to three key things – preparation, concentration and relaxation. It is, for example, absolutely essential for a screen actor to prepare by studying the script very thoroughly in advance because the subtext of the scene and the actions of the character carry as much meaning as anything which is said. He’s strong on how you keep your skills, especially observation, honed between jobs too and interesting on the question of location where the actor often has to do a lot of concentrated imagining in order to convey truth. It’s useful, down to earth, detailed advice.

The practice of film acting includes a run down on how the film industry and the process of making a film works – who does what, where, when and how from clapperboard to single camera shots and technical skills from when you should release your tears if you’re required to cry on screen, to managing your voice. The final chapter discusses the all important topic of casting and interviews.

Yet another good title in NHB’s So you want to … series, this book  will help fill in gaps for students who think their training is selling them short. It would also be a good basic introduction for any student or actor just embarking on screen actor training. 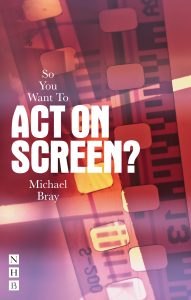