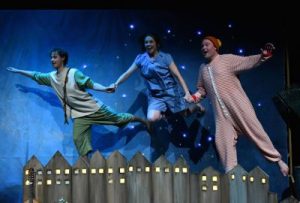 JM Barrie’s iconic Peter Pan is so multi-facted and robust that it can withstand almost any interpretation. And it’s in reliable hands with author Mike Kenny, director Wendy Harris and Tutti Frutti who rework it as a three hander. Three children – loosely 21st Century – Wendy, John and Michael are enjoying a sleep out in their own “very ordinary back yard”. When they can’t get to sleep they begin an imaginative game of make believe acting out the Peter Pan story. They use garden artefacts as improvised props so that a wheelbarrow becomes the Jolly Roger and a big plant clip stands for Hook’s hook. Best of all is the “clockodile” puppet which emerges from a pair of fearsomely toothed garden rakes and couple of flower pots.

The cast are a talented trio of actor musos whose instruments, both in movement and sound, become an integral part of the characterisation or action. Ivan Stott’s music is tuneful and resonant. Children in the audience were beginning to join in the catchy Ticking Song uninvited at the performance I saw.

Grace Lancaster as Wendy – often with clarinet, saxophone, ukulele or accordion – ricochets convincingly between playful little girl and bossy conscientious quasi-mother and she sings hauntingly. In this version – nice feminist touch – it is she, not Pan, who has the final fight with Hook. Chris Draper is a splendidly boyish John complete with an enjoyable petulant wiggle and strong as the dastardly whining Hook, clad in an old red dressing gown found in the garden. Jack Brett finds innocence and vulnerability in a mildly camp Michael and does entertaining things with the obligatory teddy bear.

All in all it’s a show with lots of charm and some original theatrical ideas (sleeping bags for mermaid tails and symmetrical clarinets for Peter’s shadow). It works both as a commentary on a well known story and, billed for 3+, as an introduction for very young children who are new to it.