The War of Elkin’s Ear

OK “war” might be a bit of an exaggeration but My Loved One certainly looked like a bit-part actor in a field hospital scene by the time Ms Alzheimer’s and Royal Sussex A&E in Brighton had finished with him on Sunday.

It all started with the TV remote control. Blooming thing went AWOL on Saturday night. MLO’s incessant, obsessive, tiresome fiddling with, and moving or “hiding”, things, has got noticeably worse of late. I’m always reminding him to put things down or quietly replacing them where they should be. But I can’t supervise every waking minute, Ms A is very sly and things have an increasing habit of simply disappearing. I don’t actually watch a lot of TV but I reserve the right to do so when I want to. At present I can’t apart from on my iPad. And that’s jolly annoying. It had been a difficult couple of days anyway with a series of very bad, broken nights. The lost remote was the last straw. I sounded off forcibly at MLO (I know I shouldn’t but …) and on the family Whatsap group.

Early on Sunday morning my younger daughter-in-law – who must be one of the kindest, most tolerant and thoughtful women on the planet – rang. “Susan, I think you should come to Brighton today” she said. “You need a break. We’ll look after him while you go out for the afternoon – round the Brighton Open Houses, for example”. So I scampered round tidying up, phoned Ocado to change my delivery slot and grabbed MLO’s emergency rucksack – the grown up equivalent of a nappy bag. Then I bundled him into the car and headed for the M23, arriving at their house about noon.

The Brighton Open Houses were lovely. I had a good look at the arts and crafts in about six of them, bought a pretty bracelet and then had a quiet cup of tea and a read in the lovely café and blissful solitude at St Augustine’s Events Centre before heading back. It was really quite a therapeutic couple of hours. I felt almost calm. Back at base our son started to cook a vegetarian roast supper for us all. MLO kept picking up their remote and trying to tell me he’d found ours but we worked round that.

So far so good until, ten minutes before the meal (smelling good) would have been ready. MLO suddenly got up from sitting next to me on the sofa where we’d been looking at the Sunday papers. Usually now wobbly when he’s vertical, he lost his footing and slipped. He seemed to slide on a newspaper one of us had left on the floor and fell into the bay window where his head hit the radiator.  The sharp-ish edge of it sliced his ear lobe and almost severed it.  Cupping it in my hand in horror I yelled for the chef and of course the upshot was that within a few minutes, at about 6.00, we were heading for A&E, turning off the oven and leaving long-suffering Daughter-in-law to get GD4 (aged 4) to bed.

Inevitably it was a long, long evening. As always with the NHS we had a great deal of excellent, caring, competent service from individuals culminating in a very pleasant young Ear, Nose and Throat doctor named Sarah who put 10 stitches in Elkin’s Ear and made it whole again. The staff are brilliant.  It’s the system and modus operandi which could do with a shake-up.  We finally ate our re-heated nut roast at about midnight.

By then it was, obviously, too late to drive back to London. Bless them, they gave us their bed so MLO could use the en suite, and lent us PJs. Then our lovely son rustled up cooked breakfast in the morning for a treat. We finally got home at about midday on Monday, much to the relief of our very hungry cat.

So much for my having any sort of respite – I was much tireder at the end of all this than at the beginning. The whole experience has taught me a few things, though.

I’ve realised that I’m still underestimating MLO’s growing and complex disability – possibly because it changes every day, mostly for the worse. He needs watching and probably assisting when he gets in and out of a seated position.  QED. Most of the time I do it but I still forget sometimes. One of the things they tested at the hospital was blood pressure lying and standing and it seems his BP drops when he’s on his feet – hence the wobbliness. Susan, take note. And just forget all that much bandied about stuff which implies Alzheimer’s is mostly about memory loss. It’s a holistic disease with long and powerful tentacles.

I am also reminded of just how supportive our fabulous family are. That long wait at the hospital would have been much worse if our son hadn’t been with us. He could have dropped us off and come back for us but I don’t think the thought even crossed his mind. And his wife, whose evening and weekend was completely scuppered just takes it all equably without a word of complaint.  GD4, meanwhile, bought me some flowers – all her own idea, apparently – while they were in the supermarket just before we arrived. “Let’s get some flowers for Granny Susan”. Yes, I have a lot to be very grateful for. 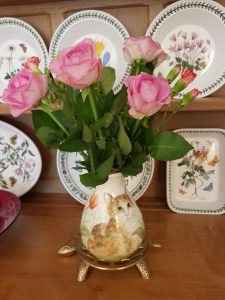