Time is one of the last abstract concepts to develop in children. It’s why a three year old cannot conceive of 10 more days until Christmas and many a nine or ten year old struggles with the notion that Julius Caesar invaded these shores a thousand years – or ten centuries –  before William of Normandy did. It was one of the very few useful observations I recall from my generally poor three year teaching training at Bishop Otter College, Chichester in the 1960s.

It presumably then follows that when a brain is heading in the opposite direction, at the other end of life, time is likely to be one of the first things to slip off the mental hard drive. That is certainly our experience.

I used to joke (perish the thought) about people “who don’t know what day of the week it is”. My Loved One hasn’t had a clue whether it’s Monday, Thursday or Sunday for over a year now. I’m drafting this piece on 14 January. Before I  disappeared off to my PC I asked him what month we’re in. After a bit of thought he said brightly, like an approval-seeking child: “Is it September?”  Asking him what the year is produces some unlikely answers too. Maybe because he lived the first 55 years of his life in the 20th century he readily slips back there.

None of that matters much because he can simply take each day as it comes and I’ll tell him what’s going on – careful to avoid information overload which always exacerbates confusion.

More disconcerting (for me, anyway) is his increasing inability to sort out what time of day it is or to be able to tell the time reliably on his watch or a clock. Several times in recent weeks I have told him, 6pm-ish, that I’ll start cooking dinner next job only to discover that he’s gone upstairs and started to undress because he thinks it’s bedtime. More than once he’s tried to get dressed in the middle of the night because “it’s time to get up”. I’ve sometimes found him coated and scarfed by the front door too because “We’re going to (Wherever) aren’t we?” when actually that planned excursion was hours later or the next day.

One night last week, I came in from a work job about an hour after the carer had finished her stint. MLO had painstakingly (although very badly – strange items in the wrong places) laid the table for a meal. “Oh” I said, a bit taken aback. “What’s this for?” He said it was for breakfast. He wasn’t sure how many people were coming so he’d laid it for three. He thought it was early morning. It’s quite surprising really that I don’t weep –  or tear my hair out –  more often.

Even odder – delusional in effect – is his conviction that “they” have in some way altered the time. “I don’t understand it.” he’ll say. “Why did they have to change something which worked perfectly well?” I’ve patiently explained about a hundred times that nothing has changed. In the UK we shift the time forward one hour in March and back one hour in October and have done so all his life, I point out. I get blank looks of disbelief as if I’m the one talking nonsense. It’s an idea very firmly lodged in his dementia-afflicted mind and a conversation we have on repeat loop.

Of course we’ve travelled a lot in recent years and have often had to deal with different time zones. Could that be why when I’m out working and ring him to touch base he sometimes asks me “What time is it where you are?” I tell him it’s nine o’clock at night, or whatever, just as it is for him. “No. I don’t think so” he’ll say. “I simply don’t understand this new system” and off we go again. It’s a circular route.

One day last week he was utterly convinced that if we go to Cambridge or Brighton where our sons and their families live the time would be different when we got there. Patience, patience, Susan. I explain. Again. “There are no time zones within the UK and never have been. If it’s midday in south London then it’s also midday in Aberdeen and Penzance. Trust me!”

You are supposed, I gather, not to argue with someone who has dementia. The professional advice is that you simply agree with everything they say. Hmm. I try but I really can’t have him getting dressed and wandering off at 2am or trying to go to bed when he hasn’t had any supper.

When it’s things which really don’t matter I’m trying to cultivate casual granddaughter-speak and that usefully impartial word “Whatever …” although I can’t get it out without a note of irony. In a way it’s rather nice because such an expression is so absurdly far from my normal speech mode that even MLO recognises the incongruity and we smile together. Sometimes.

Learning from GD1 at MLO’s 70th birthday lunch in 2015 (featured photograph). Doesn’t he look well here on the same day! 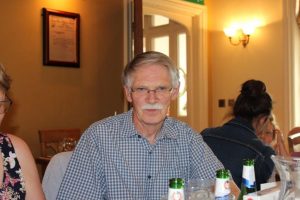