Show: The Wife of Willesden

Credits: Adapted by Zadie Smith from Chaucer’s The Wife of Bath. Presented by Kiln Theatre in association with Brent2020, London Borough of Culture.

The Wife of Willesden

I blame Geoffrey Chaucer. Over six centuries ago he created one of the most interesting women in English literature (until the nineteenth century, anyway). Alyson, The Wife of Bath is not a nun, young virgin, princess, witch or prostitute. She is independent, forceful and sexually active – enthusiastically so – with five husbands, literally under her belt. And she has found a vibrant, entertaining, truthful new lease of life in Zadie Smith’s play The Wife of Willesden which is written in unforced but flowing verse just to add another layer of referential cleverness and remind us of the source.

(totally convincing set by Rupert Jones). I suppose there’s a hint of the Tabard Inn where Chaucer’s pilgrims foregathered and chatted but this is 21st century Brent and it’s modelled on the pub over the way on Kilburn High Road. Alvita, the titular wife of Willesden (Clare Perkins)  is telling the other nine drinkers about her husbands and sharing her thoughts. The first two thirds is effectively a long monologue with dramatic illustrations from a talented, versatile cast who play all the roles often at hilarious speed. Marcus Aldolphy, for instance, is a treat in his brief appearances as Black Jesus, another actor holding a brass tray (usually used for pub glasses) behind his head as a halo. And Crystal Condie delights as the urbane author at the beginning, later becoming Alvita’s best friend among other roles.C

Perkins struts, hunches in exasperation and times every line to perfection. There’s sex, pathos, sadness, irritation and honesty all in the mix. “I hate anyone who tries to rein me in” she declares. She has a wonderful way with facial expressions too. One husband (Andrew Frame) is a bit past it and we see her trying, unsuccessfully, to get him going. The exasperated look on her face is a brilliant comic moment in a show which is not short of them. It’s a bravura performance and I hope she wins lots of awards for it.

Because she is clearly a character who interests him very much Chaucer gives his Alyson the longest section of his prologue – and twice as many lines as she gets for the tale she tells on the journey. Smith follows the same pattern giving about an hour to the prologue and half an hour to the story in this 90 minute, interval-free show. The story is a variation on the traditional loathly damsel  tale whereby a bachelor finally accepts an ugly, elderly woman (Ellen Thomas – good) on her own terms and is rewarded by her turning into a beautiful maiden. It’s very hard to make that work in 2021 even if you throw high production values at it (I loved the giant jelly fish). It feels like an add-on. And although it’s mildly funny it’s effectively a play-within-a-play and it’s too long. Actually I’d have been happy  to have stopped at the end of the marvellous, ingenious, immaculately directed,  five star  prologue section. But I’ve docked a star because of the last half hour.  And now I’ll duck below the parapet because the press night audience was pretty excited about the whole show … 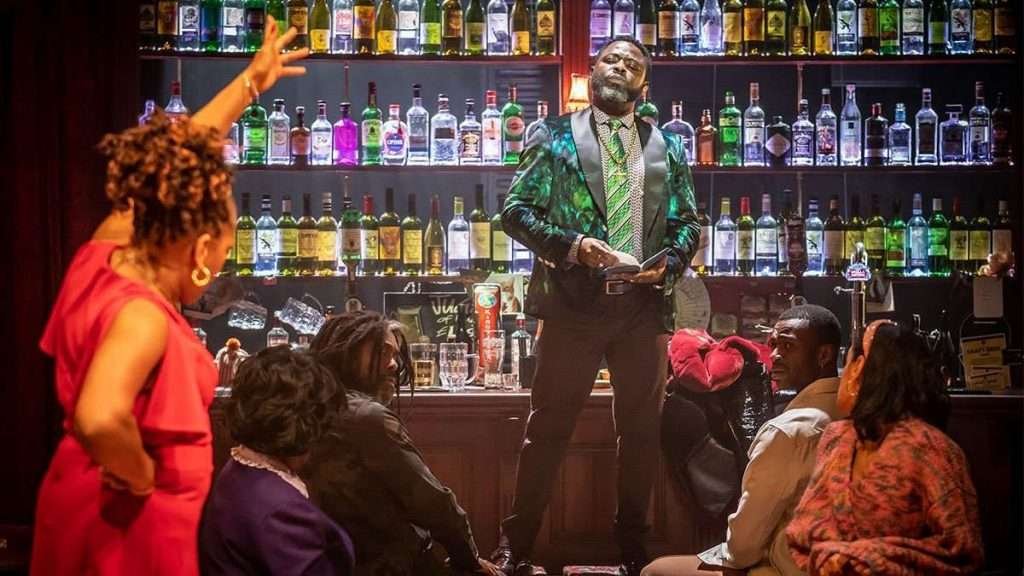 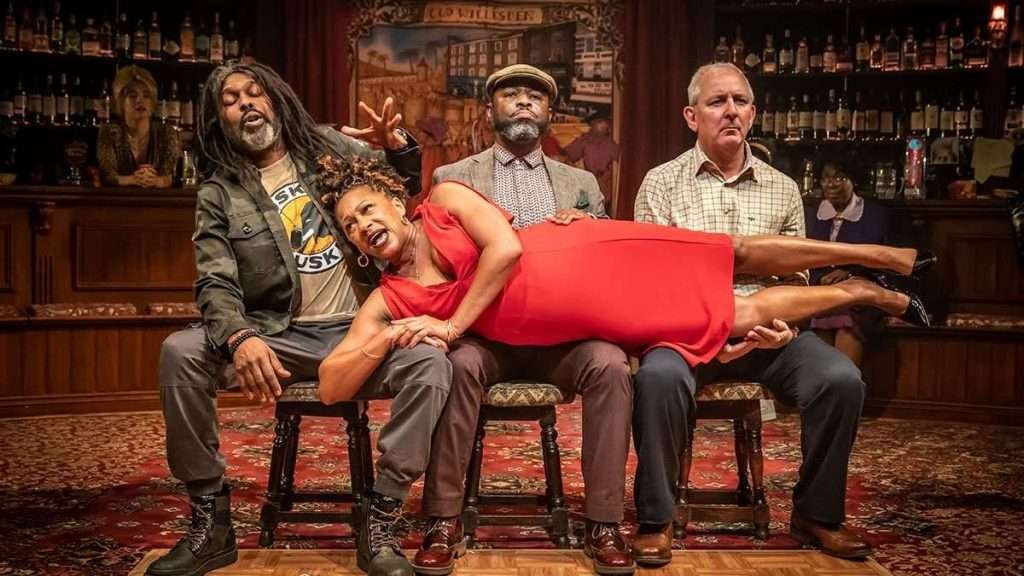 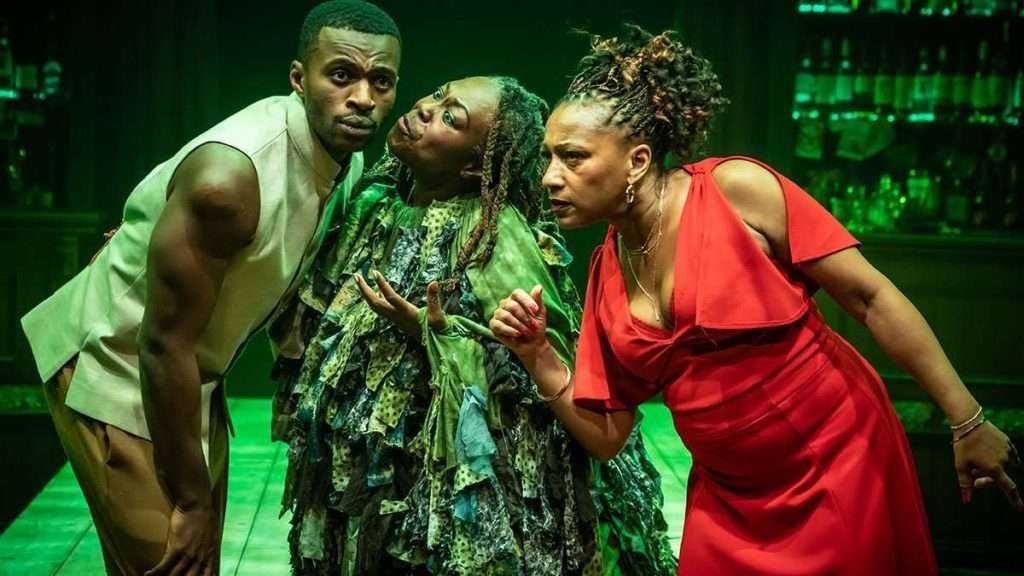 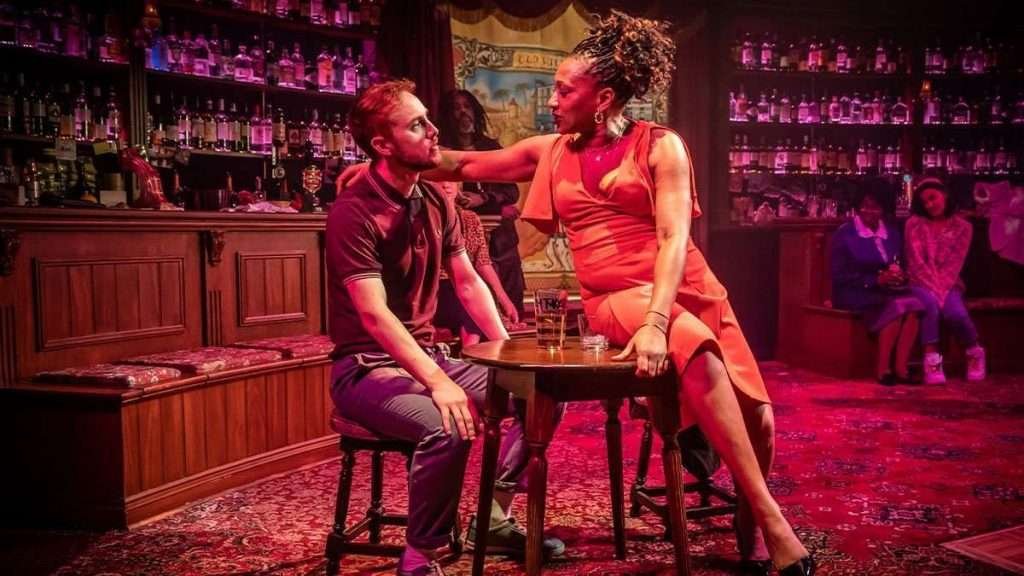