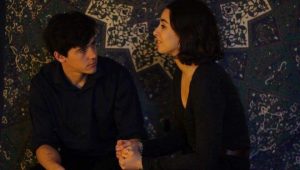 It seems to be a first date as Sam (Harriet Clarke) and Mark (Joshua Glenister) meet, with a lot of nervous constraint in the scruffy flat he is temporarily sharing with his brother. We soon realise, however, that these two have a shared past. And some.

In one of the most thoughtful and powerful two handers I’ve seen in a while this 60-minute piece explores their relationship in depth and gradually reveals why, although each professes still to love the other, there remains an insurmountable barrier between them.

The dialogue is beautifully written. Jack West may still be a novice playwright but he’s highly talented and will soon be better known, I predict. And in the hands of two fine actors, expertly directed by West, the tension soars. Each finds a naturalism which makes both characters – she’s beginning to make a name as an actress and he is keeping himself by supply teaching while he tries to find a voice as a writer – totally believable as they plead, reason, argue, fence and shout with, and at, each other.

And by golly we feel their pain. I read somewhere recently that current statistics now mean that at some point in her life one woman in three will have an abortion. That means that at every performance there are probably several women in the audience sharing, from first hand experience, the anguish, agonising, passion, debate, guilt and blame which is being acted out before them. No wonder the totally engaged silence was so palpable. It’s rare to sense an audience listening quite so attentively as they were at the performance I saw.

LAGO theatre was formed by a group of LIPA graduates wanting to create their own work. This is their third production and, good as the others were, Wine is better still. Well done, guys.