f you want a high quality piano recital cheerfully enlivened with a bit of stand up comedy than catch Steven Worbey and Kevin Farrell in action. Although they aren’t yet a household name they have performed in over 150 countries and seem to astound audiences everywhere they go – we reviewed them here when they played The Carnival of  Animals with Barry Wordsworth and Brighton Philharmonic earlier this year. 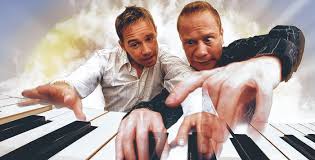 Yes, they follow in the tradition of Victor Borge and Liberace but their USP – and it’s quite a coup – is that they play four hands on one piano and arrange the music accordingly. It’s an original take on the concept of piano transcription.  This concert included their versions of Scott Joplin, Vidor’s Toccata and Fugue, Bumble Boogie, Sidesaddle and much more – culminating in a stunning rendering of Rhapsody in Blue.

Worbey and Farrell, who were at the Royal College of Music together, are partners in life as well as in music. Normally I’d regard that as a complete irrelevance but here it isn’t. There’s a comfortable intimacy in the way they play because this is definitely not piano duetting in any conventional sense.  Sharing a single piano stool, they lean across each other, tucking notes in beneath each other’s hands as they race up and down the keys taking most works at phenomenal speed. They told the audience that Joplin stipulated that his rags should be played slowly. “We’ve come to the conclusion”, Farrell said chirpily, “That he just couldn’t play them as fast as we can! So we’ll meet him in the middle.” The joke, of course, was the accelerando in the Maple Leaf Rag after a gentle start.

In addition to lots of humour – they spark well off of each other as comedians too – the concert included extracts from The Carnival of Animals which they developed for the BPO concert. Each number is preceded by an introductory verse which they’ve written and they’re pretty witty.

I also really like the projection above and behind their heads which, with a camera placed near the piano, allows the audience to watch their hands. It’s carefully thought out too. Worbey was wearing floral cuffs while Farrell’s shirt had a scarlet band at the wrist so there was never any visual doubt whose hands were whose.

They are musically highly attuned to each other and achieve some astonishing effects with prestissimo, fortissimo playing especially in the Vidor. Such virtuosic flamboyance is testament to a lot of talent, the chemistry between Worbey and Farrell and many thousands of hours of work and practice. And it makes for an entertaining concert.