Yes, I do support Technical Theatre 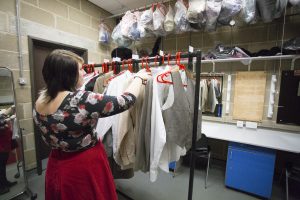 Yes, as the author of So You Want to Work in Theatre? (Nick Hern Books. 2013) which cheerfully spells out dozens of theatre practitioner options and pathways and champion of all things back stage for decades, I was a bit taken aback too.

Trying not to sigh, let me spell it out once more as simply as I can. Theatre is like an iceberg. For everyone you see performing there are several more working in invisible but vital roles as stage managers, lighting technicians, designers and all the rest. Without them there wouldn’t be a show.

It’s so obvious to industry people that I apologise for labouring it. The point is that the general public – and young people who want towork in the industry –  often don’t understand the multifaceted structure of theatre making. The frequent perception is that if you want to be in the industry at all you have to be out front acting, singing and dancing. Well of course that isn’t true and we need much better careers advice for young people in schools and colleges because, for the most part, they just don’t know about the options. People – usually the ones working in back stage jobs – tell me all the time that when they were at school no one, but no one, told them anything useful.

Enter TheatreCraft the annual London event for “non performance roles”. (And a note to my detractors: Don’t you dare tell me that phrase is derogatory or negative. It’s the one TheatreCraft itself uses and I can’t better it)

This year’s TheatreCraft (the eleventh event) is on 14th November at the Waldorf Hotel. Aldwych London. It runs from 9.30-4.00 and is always a marvellous FREE information gathering opportunity to visit stands and talk to a wide range of people in the know about a wide range of theatre career options. At the same time there are workshops – all free – but you have to register at http//www.theatrecraft.org.  Last year’s event welcomed over 1000 people and included 75 workshops.

The upper age limit seems to have been dropped but you do have to be over 16.

In the spirit of helpfulness (and because some of my best friends are stage managers, sound techies, directors, producers and so on) I’ve appended the list of the workshop options that I’ve been sent below.

I shall be there for part of the day, as usual, and hope to meet lots of you there on 14 November.

Workshops at TheatreCraft 2016 will include: