It’s Dickens at his angriest –  at least in the first half of the novel. He is relentlessly (excessively?) sardonic and the wry wit barely covers his outrage that innocent children should be treated as Oliver is in the workhouse and until he “escapes” to Fagin’s hell hole in London. Frying pans and fires come to mind. The “message” is pretty transparent.

This is an early work, published in serial form in 1937/9. Its author was only 25 at the outset. That accounts partly for the rawness – later novels such as Great Expectations and David Copperfield are better constructed and more measured. Oliver Twist isn’t even, technically, a Victorian novel. The first section was published in February 1837, four months before Victoria’s accession. At one point there are fears amongst Fagin’s lot that Noah Claypole will turn “king’s evidence” which makes you jump until you recall that we’re still in William IV’s reign.

Of course I’ve read Oliver Twist several times before – but not lately. As a theatre critic, however, I’ve seen numerous stage and TV adaptations and more  performances of Lionel Bart’s Oliver! over the years than you could shake a stick at. Inevitably such images are inclined to overlay  one’s memories of what Dickens actually wrote.

So it’s very enlightening to come back to it now and I tried very hard to put images of Harry Secombe, Ron Moody and Oliver Reed out of my head. Actually, entertaining and tuneful as Oliver! is, it’s a sanitised, over simplified, truncated travesty of the Dickens which inspired it.  It omits half the novel.

For a start both Fagin and Sikes, as Dickens created them, are utterly appalling men with few redeeming features: some of the nastiest villains in fiction. There’s nothing charismatic about either of them. Fagin, in particular, has no loyalty at all to anyone except himself and to a modern reader the idea of his living with and exploiting boys has sinister undertones which presumably couldn’t be made much of in 1837. Yet, how well Dickens understands human psychology. Being condemned to death by hanging finally costs Fagin his sanity as he sits in prison for those last few days – which I imagine was quite common. It’s actually pitiful, despite the revulsion we feel for him.  Sikes is haunted by Nancy as he tries to escape the consequences of murdering her – which makes him slightly more rounded because there is a shred of remorse in there somewhere.

Of course there are plot-holes. Although Oliver eventually gets some help from a tutor with reading and writing, he is already literate when he arrives in London. How come? No one has taught him and he hasn’t been to school. Then there are the usual Dickensian co-incidences. How likely is it that the house to which Sikes takes Oliver to burgle is the home of a young woman, Rose Maylie, who turns out to be his aunt? Or that she has an indirect connection with Mr Brownlow who just happens to be the victim of the first pocket  picking excursion Oliver is taken on? And just fancy Noah Claypole and Charlotte coming to London and immediately happening on the same gang which tried to absorb Oliver. And so it goes on. With Dickens, that’s the deal.

The casual anti-semitism grates. Of course a sensitive, sensible reader makes allowances for different cultural attitudes nearly two centuries ago but Fagin is strongly characterised for his Jewishness and frequently referred to as “The Jew” thus conflating his race with his villainy.

It’s a meaty novel and I’m really glad that I’ve reread it. What inspired me? It was the usual serendipity. I was preparing a talk about dogs in literature and wanted to check some references to Sikes and Bulls-Eye. That meant a thorough flick through. Within minutes, I was marvelling and resolved to read it properly – again. This happens to me a lot. 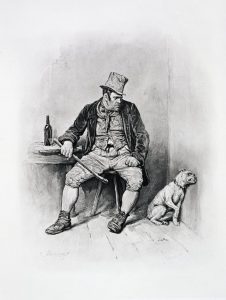 Bill Sikes and his dog, c1894. The villain from “Oliver Twist”. From “Charles Dickens: A Gossip about his Life”, by Thomas Archer, published c1894.