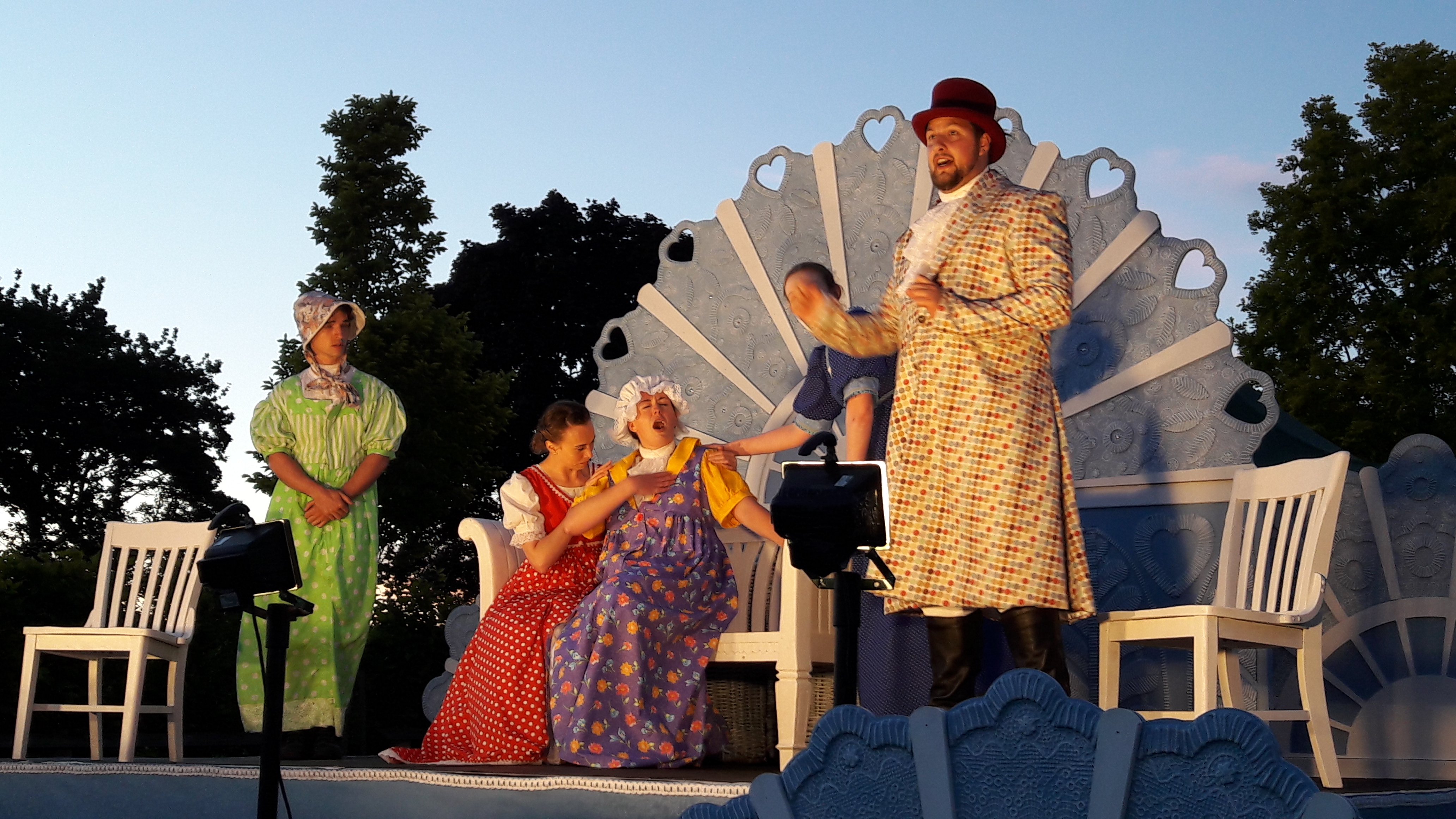 I was a weekly Evensong attender from about age 6 (with grandparents) to age 18 (independently) when I experienced an Enlightenment moment and gave it all up. But the words of that liturgy are, of course, locked in my head for ever. “Defend us from all perils and dangers of this night” being a particular favourite and I think of it whenever I’m at an open air performance.

The British are, as ever, mad, I reflected as I gathered with a large group of blanket carrying stalwarts at Coolings Garden Centre near Bromley last week for the opening performance of Illyria Theatre’s Pride and Prejudice – now touring widely. We don’t really have a climate in this country. We just have weather. And it’s unreliable.  I suppose that’s why we discuss it all the time. Open air performances in Britain is often a triumph of hope over experience. Actually it didn’t rain on Pride and Prejudice that night but there were a lot of threatening black clouds and it got very cold. The excellent cast are, of course, moving about continually and probably, on their opening night warmed by adrenaline. It’s different for the audience huddled in the drafty camping chairs they’ve laboriously lugged from the car park.

I recall press night for A Midsummer Night’s dream at Open Air Theatre Regents Park a few years back when ark-building rain deluged everyone. To their great credit the company did the first two acts – trainers audibly squeaking in the wet – while the rest of us dripped in polythene ponchos before the stage manager stopped the performance on health and safety grounds. Then there was a pop-up performance of The Taming of the Shrew by Chalkfoot Theatre in gardens at Canterbury in which you could see the rain cascading down the clothes of the hapless actors. The show must go on? Or something. I recall a Tempest in a tempest beside the lake at Mount Ephraim gardens in Kent too. The thunder rolled around while Prospero strutted his stuff. Who needs a sound engineer? And even some of those covered pavilions such as the one Garsington Opera now has at Wormsley or Opera Holland Park’s new one, where I’ve reviewed twice this week, can be very chilly when the British summer temperature plummets and the wind blows – as so often it does.

Presumably when they mount open air opera and other shows in, say,  Italy or the south of France they do so knowing they can rely on their climate to deliver the goods. No wonder they smile at British efforts to follow suit.

So why do we do it?  Because when open air theatre works it’s wonderful. There are few more glorious theatrical experiences, for instance, than Open Air Theatre. Regents Park –  or at the other end of the scale Shakespeare at the George in Huntingdon – on a balmy night.  You eat your picnic or have a meal in a nearby or on-site restaurant and then settle in the atmospheric open air, complete with bird song ready to be wowed. I was so bowled over by Jesus Christ Superstar in the park last year (and I saw it on a deliciously warm, dry evening) that I’m still thinking about it and determined to see the revival this summer. Like many shows (Lord of the Flies and The Crucible too in recent years) familiar work resonates in a completely different way when you’re outdoors. And there’s always magic after the interval as the natural light dwindles and the artificial light creates its images and effects.

Yes, it’s mad to stage open air theatre in Britain but it’s a superbly creative form of madness and long may it last. And the uncertainties – the “perils and dangers of this night” –  create a welcome frisson all of their own.