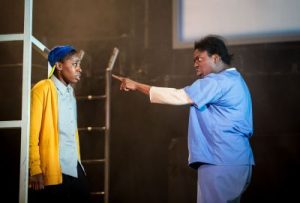 This vibrant energetic show is a manifesto for young people growing up in challenging inner cities where terrible things can happen but there’s also plenty of good and a surprising amount of humour. I don’t know Stephen Kelman’s 2011 Man Booker shortlisted novel upon which Gbolahan Obisesan’s imaginative ensemble adaptation is based so for me, the story telling is very important. I found it profoundly convincing.

Young people meet at school, in the street, at a community centre and elsewhere. A boy has just been stabbed and there has been a funeral. There is also a lot of bravado, rumour and unease in the community where bullying is rife.

At the heart of all this is Harri, a ten year old boy newly arrived from Ghana with his mother and sister, played by Seraphina Beh. It’s a terrific performance which combines innocence, perception, child-like glee, and a lot of disingenuous humour because the character is a shrewd and forthright observer of others. There’s a hilarious scene in which Arianna Beadie as Maquita (good value) tries to initiate Harri sexually and the child’s comic commentary is great fun. But this is also a pretty dark piece and the ending – immaculately acted by Beh – took me by surprise and moved me as much as anything in Shakespeare.

Daisy Fairclough is compelling as Harri’s troubled older sister Lydia and Chinenye Ezeudu gives a nice performance as their salt-of-the-earth no-nonsense mother. Nearly all the other minor roles are adeptly seized and run with by the talented young ensemble, which is also immaculately directed (by Anna Niland) in the well paced chorus work. There are several pulsing dance scenes and I loved the steel pan number at the carnival. Charlotte Law does her best with the Never Normal Girl, who speaks in verse – part of the action as well as outside it – as a commentator and narrator. It isn’t Law’s fault that this is the only part of this otherwise fine show which feels pointless and contrived.

This is the first of NYT Rep’s three play 2016 West End season and I can report that the standard established in previous years seems to be holding up pretty well.