Many of the supportive audience waiting attentively in the sharp acoustic Worthing’s assembly hall had been following the competition all week. So by the time it reached the Grand Final on Sunday afternoon it was very much a case of “Now sits expectation in the air”. 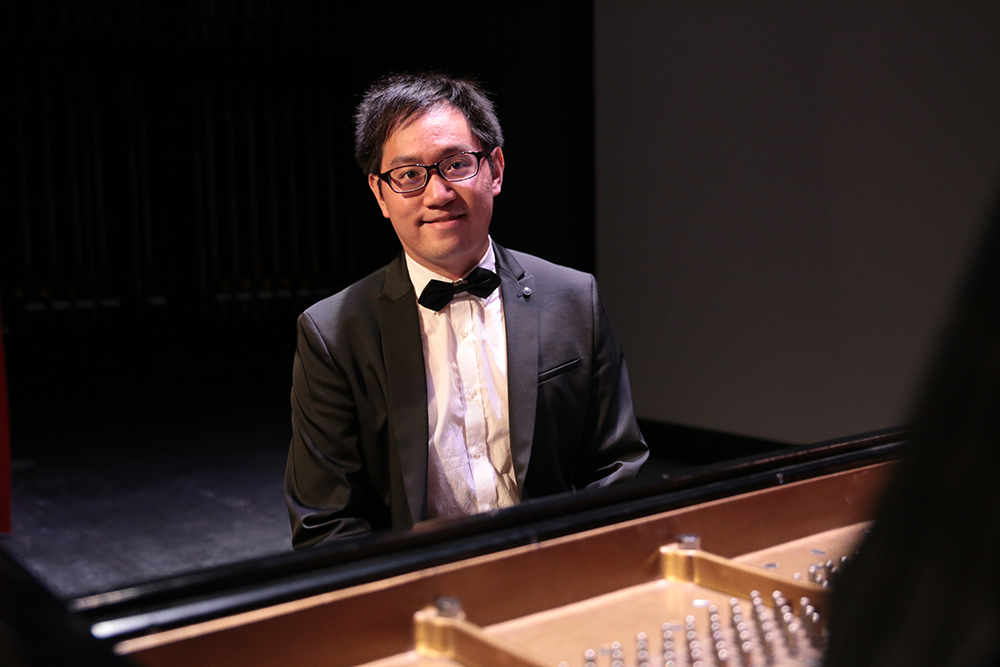 Three fine soloists played three (different) concertos with the somewhat pared down Worthing Symphony Orchestra conducted by John Gibbons who is also the director of the competition which launched in 2010.

The orchestra did well although it’s a big ask to accompany Tchaikovsky’s First Piano concerto with only three desks of first violins, three of seconds and two each of cellos and violas. B flat minor is hard work for string players at the best of times and when numbers are so low it becomes even more of a strain. Moreover the acoustic of the hall means that brass and timps can sound too loud especially for listeners in the gallery and when strings are relatively thin. These are passing observations though, rather than gripes. In general Gibbons and his orchestra accompanied the competing soloists with warmth, commitment and panache.

First up was Rhythmie Wong from Hong Kong playing Chopin’s Piano Concerto No. 1 in E minor. Petite and very young looking she played the creamily romantic piece with poised stillness. She brought neat dynamic control especially in the first movement with its passages of rippling 6/8 and in the dancing lyricism of the finale. And it was reassuring to see Gibbons beating the bars during Wong’s middle movement cadenza which she played with so much  rubato that I would certainly have got lost. Good to know that professionals, potentially at least, have the same problem.

Then came Russian Sofya Bugayan with the Tchaikovsky. It is, of course, a magnificent old war horse but that makes it harder to bring off because almost everyone listening knows it. This performance had some fine moments – a very exciting alla breve in the first movement for example and some commendably precise pizzicato work. And Bugayan’s passionate interpretation of the middle movement was impressive. It’s a pity thought that some of the tempi were misjudged which meant that sometimes Bugayan was falling over herself at high speed. In a piece this well known wrong notes show.

The afternoon concluded with Yi-Yang Chen from Taiwan who played Beethoven’s fourth. Totally engaged with orchestra, conductor and audience he played the concerto as if it were chamber music,  alertly and intensively looking up and looking round continually. The first movement was, unfashionably, slightly under the tempo set by Beethoven’s metronome markings which allowed us all to revel in the detail such as the horn interjections, flute passages, bassoon colour and all the rest of it. And Chen, throughout, was totally at one with the orchestra. Rarely have I heard a performance which made it quite so clear that Beethoven is rejecting classical conventions and finding a highly expressive romantic voice. That’s what Chen, young as he is, wanted us to hear and we did.

Gibbons is clearly very accomplished at supporting young, relatively inexperienced soloists. With Chen, who visibly feels every note of the music, it felt much more of an equal partnership

At the end of the concert and the competition my money was firmly on Chen to win. Happily the judges agreed with me and he was, after an interval for them to confer, declared the overall winner of the 2018 Sussex International Piano Competition. He receives a £5,000 cash prize and the opportunity to make a recording at Champs Hill. The audience must have approved too because he also won the Audience Prize.