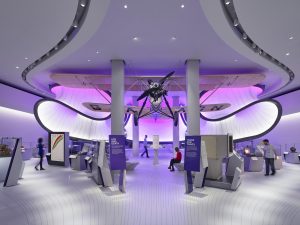 A visit to the new Winton Gallery at the Science Museum highlights the role mathematics has in shaping our world. Susan Elkin is our guide.

The sea churned beneath me. The tiny plane kept dipping down towards it. Nightmare stuff for someone who dislikes flying so much that I never even sit in a window seat because I don’t want to see the ground. But actually on this occasion my feet were firmly on the ground. I was at the opening of the Mathematics: The Winton Gallery at the Science Museum last month. My foray into a light aircraft was courtesy of a high tech Samsung headset where the commentary explained the digitally presented principles of flight. And it’s testament to the effectiveness of the experience that I found it really quite disconcerting.

The new gallery, mainly funded by David and Claudia Harding with Samsung as principal sponsor, is entirely dedicated to maths. It seeks to show that maths underpins all aspects of everyday life, just as language does. And the gallery itself is a stunning example of art meets science. Designed by Zaha Hadid Architects it uses the patterns made by air currents in flight as its visual inspiration. The result is a huge central mass of pink/purple blue ethereal but solid, beautifully lit shapes between the roof and a Handley Page “Gugnunc” aircraft. It’s an impressively dramatic statement.

The content of the rest of the gallery is based around 100 items from the Science Museum’s collection. Each tells, or contributes to, a powerful story about how maths has shaped, or been shaped by, some of our most fundamental human concerns – from trade and travel to war, peace, life, death, form and beauty – during the last four centuries.

Thus there’s a 17th century Islamic astrolabe which uses ancient mathematical techniques to map the night sky. Nearby is an early example of the famous Enigma machine used to resist code breaking during World War Two. Also on display is the box of glass eyes which Frances Galton used in 1884 to develop statistics to support the political movement he called “Eugenics”. There’s a splendid classical door case from Lincoln’s Inn to demonstrate that architecture is a mathematical discipline because of its links with geometry.

There are displays about medicine, forensics, statistics and much more – although I was slightly puzzled by the conspicuous absence of music which has many inarguable mathematical patterns and concepts. Captioning and explanations are commendably well written and accessible. The loud and clear message is that maths is crucial to life and closely related to most other subjects so somehow we have to engage young people with it as something exciting and interesting to learn about and experiment with, rather than letting them write it off as boring and difficult as so many adults do. It also makes the point that you cannot study or appreciate maths in isolation. Its real beauty is its intricate relationship with everything else.

Dame Zaha Hadid died suddenly last year so she didn’t, unfortunately, see this project through to fruition – her company’s first museum gallery design. Her influence is everywhere in the gallery though. Having studied mathematics at university she always regarded it as central to her work. “When I was growing up in Iraq, math was an everyday part of life” she said. “We would play with math problems just as we would play with pens and paper to draw. Math was like sketching.”

That is the attitude we need to cultivate in British children today and the Winton Gallery could help. It is now open daily and admission is free. I predict that many school parties will visit as well as families. “My dream is that soon the ‘maths field trip’ will be as standard as the theatre visit or geography expedition now that this gallery is here” said David Rooney, lead curator of The Winton Gallery, at the launch.

Rooney is also the Science Museum’s Keeper of Technologies and Engineering. His new book Mathematics: How it Shaped Our World is effectively an adjunct to the exhibits on display in Mathematics: The Winton Gallery. www.sciencemuseum.org.uk/mathematics

Mathematics: How it Shaped Our World by David Rooney. ISBN 978-1-78551-039-7 Scala Arts and Heritage Publishers. RRP £40 hard back. The paperback version, £25, is available only from the Science Museum shop.