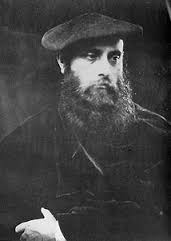 William Rossetti was an arty, bookish, party-loving Brit.  But someone in the family had to earn some money.

The four Rossettis, whose Italian father had arrived broke in London in the 1830s, were a clever lot.

Goblins. Two sisters are up to no good in a wood with a posse of goblins who come ‘hobbling, / flying, running leaping, / Puffing and blowing, / Chuckling, clapping, crowing, / Clucking and gobbling, / Mopping and mowing’ Then, goblins ‘chattering like magpies ‘ and fluttering like pigeons,’ it all gets a bit touchy-feely.

Crocodiles. In ‘My dream’ sinister sexy crocodiles swell up and gobble each other.

Christmas. Boy, was it cold in Christina’s world.  ‘In the bleak mid-winter / Frosty wind made moan. /  Earth stood hard as iron / Water like a stone.’

Death: ‘Remember me when I am gone away. Gone far into the silent land.’

Because it’s such a tasty mix, her stuff is more popular today than it’s ever been.

Even Maria, the eldest Rossetti, and the one you guys probably never heard of, learned Latin and Greek almost before she was out of diapers and translated the whole of Dante into English.

But it was poor William, the third Rossetti sib, who just had to pick up the pieces and keep the family show on the road while everyone else got on with being brilliant. And did he feel jealous? You bet he did.

Because you see, he was no less artistic, excitable or talented than his brother or sisters.  He just drew the short straw instead of world famous pictures.

So he’s only remembered as having been brother to Dante Gabriel and Christina  (and, just for good measure eventually son-in-law to the painter Ford Maddox Brown. They liked to keep art firmly in the family, these Rossettis.)

By the time Dante Gabriel (plain ‘Gabriel’ to his family) was in his teens he was clearly a Seriously Talented Boy. Studying art at London’s famous Royal Academy was the only thing for him.   But poor old Mr Rossetti, couldn’t pay.  A rather romantic Neapolitan immigrant who had been teaching Italian at Kings College London, he was now ill and could no longer work. Family wealth? None.

So it was all hands to the pump. William took a job as an excise clerk to support his brother.  As soon as they were old enough his sisters took live-in jobs as governesses. They loathed it so quit.  William however went on pushing dull pieces of paper around Civil Service desks for the rest of his working life, dutifully bailing out first this member of his brilliant, but hard-up, family and then that.  Bitter? If so he didn’t shout about it.

One of the lads

The young William hung around with his brother.  Then Dante Gabriel, Holman ‘Light of the World’ Hunt and John Everett Millais started the famous Pre-Raphaelite Brotherhood, a boys’ club dedicated to old fashioned painting.

They used to meet clannishly in a dark upstairs room in the Rossetti home in Charlotte Street, London, near the British Museum in Bloomsbury.  William was one of seven full members. He edited the short-lived Pre-Raphaelite magazine The Germ – and no, it wasn’t catching.  But it was supposed to contain the germ of lots of ideas.

Once Dante Gabriel had left home and gone to live in an exotic (he kept a wombat in the garden) London house in Chelsea, there were parties so wild that Dante Gabriel’s mother and sisters were scared to call without an appointment.

On one occasion three well-boozed young men – Dante Gabriel, William and the poet Algeron Swinburne – were heard and seen sliding naked down the banisters. So William was no stooge. He too could easily have been a tearaway if he’d had the chance to indulge himself.

Two sisters and a mother to keep

Dante Gabriel eventually got famous and made money (he also got married, addicted to chloral – a lethal cocktail of whisky and laudanum – and died, but that’s another story). At least his brother didn’t have to stump up for him.

But old Mrs Rossetti and her daughters were usually a bit short of the ready. Christina made a bit from her poems after her first volume was published in 1862, but not enough to live on.

So William carried on doing the grown up thing at the Excise Office. At the same time he moonlighted as an editor and writer of history books.   And, like all the Rossettis, he spoke fluent Italian so could do translations.

Whether Dante Gabriel now chipped in to the family budget is not recorded.   He loved to paint luscious, long haired, red-headed beauties. Sometimes he coaxed them in off the street so perhaps his mind was on matters other than his mother’s bills.

William too might have liked to paint Janey Morris – wife of William Morris and Dante Gabriel’s lover and favourite model.   Or perhaps he would have liked time to pen some of the purple poetry Dante Gabriel was writing when he didn’t have a brush in his hand: ‘The Blessed Damozel’ and other such lurid stuff. But, alas, William was only the kid brother. And someone had to pick up the tab.

Things got really tricky when the long-suffering William got set on marrying Lucy Maddox Brown. Her pa had  been involved  in the original pre-Raphaelite thing.   So she and William had known each other for ever – since Lucy was a small child. When they married she was 30. He was 44.

And one house was not large enough – nothing to do with the number of beds and baths – for the independently- minded Lucy, the fiery Christina, the pious Maria and their lively mother. So William had to set up separate quarters nearby while continuing to subsidise his womenfolk.   Maria soon decamped to a seaside convent. There she took the veil, took ill and died not long after.

William’s reward for his sustained selflessness was to outlive all the three siblings who had cost him so much for so long.  Christina, who died painfully of breast cancer in 1894, was the last of the three to go. So what did he do then? He wrote a family history, edited all Christina’s poetry and generally looked after family interests, supported by his four children. He finally died in 1911, aged 82.

Trying not to be first: A life of Christina Rossetti by Kathleen Jones (1991)

William Morris: A life for our time by Fiona MacCarthy (1994)