Why do we bother with bag checks?

What is the point of the perfunctory bag checks which have arrived in theatreland during the last couple of years? Apart from fatuously trying (and failing in most cases, surely?) to persuade us that theatre management will keep us safe from terrorists and the like while we’re on their premises I can’t see that they achieve anything at all.

A two-second glance can’t possibly tell the checkers anything useful. After all, if you had a gun or whatever and planned to use it you would hardly leave it sticking out of the top of your bag. It would be in a zipped side pocket, or in that slot at the base of many women’s shoulder bags which is designed for an umbrella. Or what’s to stop you concealing it in the inside pockets of a big loose coat – on which there are never any checks?

They are slightly more thorough at Royal Albert Hall where I’ve been many times recently to review Proms. There I think the checkers are proper security people. They shine a torch into your bag and I’ve sometimes been asked to move or unzip a large item at the top such as my purse or tablet case. I’m a journo, after all.  My bags are large, capacious and full of things I need to work with often in several places in a single day.

All most searches do it to create long queues outside the building where there used to be none. Trying to get through the door for Swan Lake at London Coliseum last week, for instance, was absurd. Three long queues snaked off in every direction along St Martin’s Lane, depending which door punters were trying to enter by. People were frustrated and pavements were blocked for passers-by. And, of course, delays like these mean that shows rarely start on time these days which has implications for performers, audience members and theatre staff all of whom have to plan journeys home at the end of the evening.

Moreover, I can’t be the only person who finds it intrusive. I have nothing to hide but the contents of my bag are part of my private world and I really don’t care for having it peered at and into by strangers. It makes the poor front of house person who has to do it uncomfortable too. I don’t know what training, if any, they’re given but most of them seem pretty ill-at-ease and apologetic to me.

And for what? Does any sensible person seriously believe that any of this bag search fiasco would stop someone getting into a theatre with a weapon if, heaven forfend, the determination were there?

In a small way, I prove my point every time I arrive at a venue. A sharp kitchen knife with a four inch blade and plastic sheath lives permanently in my bag. Of course I’m not going to stab anyone with it but in theory, if I were so minded and quick I could probably see off two or three people before I was stopped. I carry it, in all innocence, simply because I eat a lot of apples and can no longer, with my rubbishy teeth, bite hard fruit off the core. My bag has been cursorily “inspected” at hundreds of performing arts venues and no one has ever spotted or mentioned my knife. Pointless exercise then. QED.

So we might as well stop doing it in the way it is done now. Either we should simply not do it and trust to the laws of probability which tell us just how unlikely (although not impossible – think of the Ariana Grande concert) in statistical terms it is that a terrorist would target a theatre. Or if that won’t do then we need to find a way of checking bags thoroughly and efficiently without keeping people hanging around often in cold or wet conditions and without causing shows to start late. I have no idea how ….  But telling people to arrive half an hour early is not the answer. The ticket-buying public deserve better. 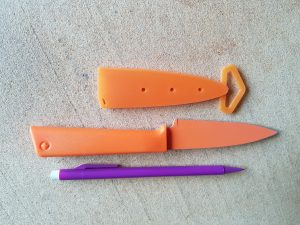