Brian (Simon Lipkin) is a flyboy, very dodgy and the last person you need as a friend, especially when you’re down. Roger (Dan Skinner) is a vulnerable, decent chap but very miserable, prone to making bad decisions and the least perceptive person on the planet who never learns from experience.

The two have met at a meeting for divorced dads. And I laughed a great deal as Brian exploits Roger repeatedly while the latter, ever reasonable, goes along with his schemes which lead the pair of them into situations which get more and more outlandish – and hilarious. If I mention – wire cutters and a surplus toe, trekking mountains in China alone on a donkey, poker games in an abattoir, SM with Ophelia, bestiality and assisting a disappearing clairvoyant you will get the flavour. It’s an escalatingly episodic piece which sustains the craziness for 2 hours including an interval.

I was, moreover, fascinated by the structure which is reminiscent of an 18th Century epistolary novel such as Les Liaisons Dangereuses. But this is the 21st Century so instead of letters the entire piece consists of phone messages which we see the two characters leaving for each other. Only once – in what is probably the funniest, most farce-like scene of all – are Brian and Roger in the same space. And then we can’t see them because there’s a power cut. It’s a clever play in which the audience sees further than Roger, over and over again because it’s so clear what Brian is up to. The joke is that Roger is taken in: a simple but effective form of dramatic irony.

Lipkin excels as Brian – slippery, cajoling, ebullient and manipulative. The scene in which he has a appointment with his SM “therapist” is unforgettable and all set up through a window in the right-angled set – which the audience views from the other two sides of the square.

Dan Skinner brings a sensitivity and humourlessness to Roger which is really convincing. The acting is very naturalistic not least because we start with two men who seem quite grounded back in London where their lives are not going well. The deadpan way they sustain this naturalism into the realms of farce and comic books is part of what makes this show work.

Timothy Bird’s video designs are a big plus too. Projected onto the right-angled back screen are constantly changing images – a London street, a red light district in China, the GPS map of Chinese mountains with moving spot (donkey), an abattoir and so on. Often they flash up to illustrate what’s being said which is, in itself, funny. Many of them are absurdly bright and some have a three dimensional illusion.

Brian and Roger is a spin off. It began life as a series of podcasts by Harry Peacock and Dan Skinner who started improvising sketches as two divorced dads simply to amuse themselves before realising that perhaps they were on to something. That, obviously, is why the stage show is episodic but it doesn’t matter at all. I came to it “cold”, knowing nothing about the podcasts and had a good evening. Anything which makes me laugh as much as that more than earns the fourth star. 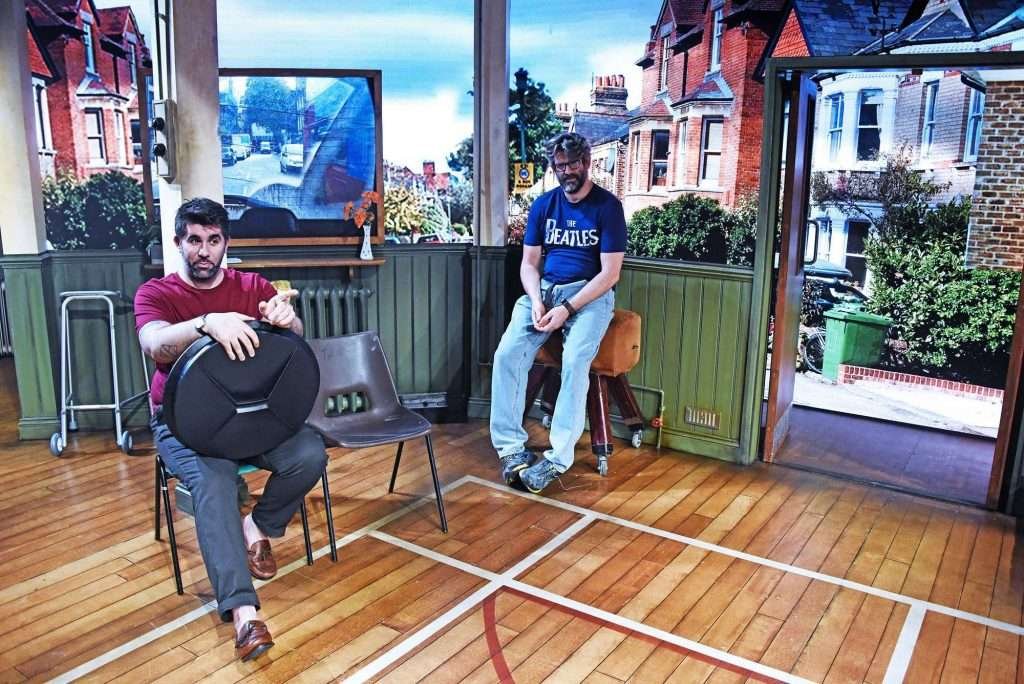