On a personal level this was a very much a “been-there-done-that” sort of concert. Mozart’s Haffner symphony was the very first whole symphony I played in public (Lewisham Philharmonic – never mind how long ago) and I hold it in great affection. And I did Beethoven 7 only last week with the South London Community Orchestra I now play second violin in. The intimate knowledge – including with the Beethoven being able to visualise the music in my head and knowing where the page turns come – certainly makes for a different listening experience.

In Ben Gernon’s interpretation of the Haffner – a succinct symphony – I admired his control of dynamics and lightness of touch in the opening movement, followed by an elegant andante, a wittily executed minuet and trioand a rousing presto taken at an impressive pace.

Then came the centrepiece: violinist Tamsin Wayley-Cohen and the Mozart K291, the 5th concerto known as the Turkish.  It’s one of those works which makes you smile at every fluent bar of Mozartian playfulness including the pianissimo solo entry in the first movement which Wayley-Cohen carefully underplayed on her mellow toned Stradivarius instrument. She had fun with the “Turkish” section leaning gleefully on exotic harmonies and she played the decorations in the finale with insouciance.

She’s an interesting musician to watch because she played this concerto as if it were chamber music, leaning in to the conductor and leader with lots of eye contact, her body angled away from the audience. She also often joins in with the orchestral sections – commendably un-diva like in her dramatic flowing white dress and silver heeled shoes. Then she stunned the audience with her flamboyant encore. I have absolutely no idea how you do double stopping and left hand pizzicato at the same time and her account of the second section of Kreisler’s Recitativo and Scherzo Caprice was dazzling. 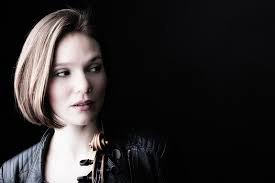 And so to the delights of Beethoven’s glorious Seventh Symphony played here with all the repeats respected so it was a meaty rendering. Gernon, who works without a baton, kicked off at a very slow speed so that every note in the gentle rising scales between the big chords was clear. Then he shot off like a romantic era rocket when he reached the vivace all the way to that wonderful moment when the horn does its white water rafting blasts at the top of the texture just before the end of the movement – just one example of lovely work from principal horn at several points in this symphony.

Gernon’s allegretto was crisper and less self indulgent that some conductors and it felt refreshing as did the supple, agile dance he created in the presto while still allowing plenty of weight in the middle section with sustained notes and horn melodies. His fourth movement – very fast indeed – was powerful too because despite the speed every detail was attended too and there was some excellent trumpet playing – bags of the requisite brio.

I thought that a programme like this would pack the Dome to the gunwhales. Sadly it didn’t. Of course there were a lot of people there but there were also far too many empty seats. Come on, folks. Brighton Philharmonic needs big audiences to survive. And you missed a treat this time.