The Brighton Philharmonic Orchestra finished the season in fine festive fettle. I don’t often laugh aloud in the concert hall but there was plenty of that in the Dome for this unconventional programme.

Malcolm Arnold’s piano concerto op 104 – new to me, and I suspect, to most of the audience – doesn’t get out much because it was written for husband and wife Cyril Smith and Phyllis Sellick. Cyril Smith had lost the use of his left arm through strokes so the piece was written for three hands and two pianos – which makes it expensive and impractical for most concert promoters.  Stephen Worbey and Kevin Farrell, who work as a witty and very accomplished duo, have arranged the concerto for four hands on a single piano. 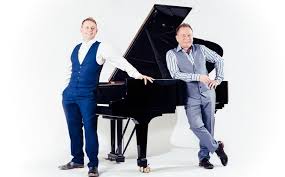 Written in 1969, it’s a very listenable piece. Both orchestra and soloists shone, especially in the middle movement which engagingly alternates schmaltz with dissonance. The last movement, for which Worbey and Farrell changed places, is very jolly with cheerful tuba vamp rather similar to Andrew Lloyd Webber’s (imitative?) Jesus Christ Superstar song for King Herod – written a year later.  Worbey and Farrell are showman musicians who warm the audience up with jokes before they start – it sits somewhere between Victor Borge and pantomime – but it’s good quality fun and their flamboyant playing is riveting. Their Sabre Dance encore – played at prestissimo and more – was a tour de force.

The concert had begun rather more conventionally with the Karelia Suite in which Barry Wordsworth allowed every section to have its moment. The busy repetitive string work in the first movement can, for instance, be hard to make lively but in this performance it did real justice to the soaring brass above it.  The warmth and suitable lushness in the two following movements, when the violins get most of the melody, was strong too.

I presume the programming of the second half was partly to create an end-of-season party atmosphere and partly to encourage people to bring children. It succeeded on both counts. It would have been good to see even more under-11s for Barry Wordsworth’s arrangement of three numbers from Act 1 of Coppelia and the Carnival of Animal, but splendid to see even twenty or so. Coppelia – like all good ballet music – is full of glorious melodies and played well, the music itself dances. Conductor and orchestra gave it their all and it was quite hard to sit still and refrain from humming along.

The concert ended with Saint-Saens’ best known piece, which – if you think about it – is another work which doesn’t get many performances in its entirety. We are very used to hearing its 14 separate sections but it’s a treat to hear all of it in one place. At the heart of it were the inimitable Worbey and Farrell who’d written hilarious Hilaire Belloc-style verses to introduce each bit – except for Pianists when Barry Wordsworth stepped forward and read a verse. Of course it was all beautifully played with accomplished solos from principal cello, principal double bass and, best of all, the xylophone. I enjoyed the off stage clarinet as the moving cuckoo too – with many of the audience looking round wondering where the sound was coming from.

The concert took place on the first day of British Summertime so I left the Dome in daylight with a real spring in my step, a head full of earworms and excitement about the next season which looks excellent – yet again.

This review was first published by Lark Reviews http://www.larkreviews.co.uk/?cat=3