Loosely, but not aggressively, themed for Remembrance Day this concert gave us the works of one composer whose pacificism drove him across the Atlantic, one who served as a medical orderly in World War 1 and one who was killed on the Somme.

Britten’s D Minor Violin Concerto was completed during the composer’s voluntary exile and premiered at Carnegie Hall in 1940. Matthew Trussler, modestly looking like a half dressed, rapidly growing schoolboy in a tight white shirt, played it with verve, maturity and impressive control. It was easy, in this performance, to hear menace and the horror of war in some of the abrupt harmonies and desperate sadness in the lyrical passages. The War Requiem might lie twenty two years into the future but the anger and distress at the futility of it all is clearly there already. Barry Wordsworth ensured this came out strongly although he also, wisely, allowed Trussler his head. The playing in the long cadenza was edge-of-the-seat stuff with exquisitely accurate trills on harmonics and the unusual technique of left hand pizzicato with simultaneous legato bowing. Even the rising and descending scales, of which there are lots for both soloist and orchestra, were made to sound musically compelling here. 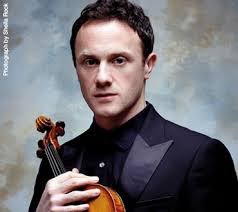 The other long work in the programme was Vaughan Williams’s strident, angry fourth symphony which dates from 1935. Wordsworth leant on all the big RVW themes and played up the syncopated passages in the last movement to enjoyable effect. The central scherzo was evocative and carefully managed. For this final work in the programme the orchestra was fully warmed up.

Also appropriate in its wistful way was George Butterworth’s A Shropshire Lad: Rhapsody which opened the second half. Plenty of yearning, lyrical beauty came through some fine playing.

This concert opened with Stokowski’s arrangement of Bach’s Toccata and Fugues (more D minor) which was an odd choice. Yes, it makes a splendid opening – all drama and semiquavers – but it’s hard to listen to it, I’m afraid, without thinking of Fantasia and  irreverently expecting Mickey Mouse to appear. Moreover some of the entries were a bit ragged in the first few moments although by the time we got to the fugue, inspiringly started by the violas, it was all sailing along grandiloquently. If, however, we were meant – in part – to be focusing on Remembrance Day then this work seemed inappropriate.

Two further small observations about this concert, one positive, one less so. First, it’s grand to see and hear a selection of works which make such good use of the tuba and it’s fun to see the enormous mute going in and out of the bell. Well done,   Principal Tuba. Second, I wish they’d sort out that percussive whistle which whispers in the Dome when it’s quiet. You could hear it all too clearly during the Britten. I don’t know whether it’s the heating, air conditioning or something else but it’s always there and needs dealing with.