Well we are now officially a “Golden” couple. The much anticipated 50th anniversary fell last Friday and we are now enjoying (or something) our 51st year of marriage.

I used to think that we’d probably sail on to 70 years together like the late Lord and Lady Longford or the Queen and the Duke of Edinburgh. After all, if you marry in your early twenties, you have only to live into your early nineties which, given our healthy vegetarian, active lifestyle seemed a reasonable ambition. But fate and hideous, hateful Ms Alzheimer’s have decided otherwise.

I’ve realised for some time that this will be our last landmark anniversary so despite My Loved One’s vagueness about it all it seemed a good idea to Do Something. For our 25th we had a big party at home and we took 45 people to lunch in a hotel on the 40th anniversary.

This time I hired the eight bedroom Tudor Wing, attached to an even larger house in lovely countryside near Tunbridge Wells so that the entire, immediate family could spend a long weekend together. That meant a house party with two sons, two daughters-in-law, four granddaughters and eldest granddaughter’s boy friend. My sister and her family – seven of them –  joined us for Sunday lunch along with GD3’s lovely mother.

It was all pretty upbreat and fairly restful for me because there were lots of other kind people around to help MLO who never, for example, could find his way round the large premises, which  – variously dating from 1350, 1460 and the nineteenth century –  has a lot of doorways, stairs and steps. And on Saturday morning I was able to go to Tunbridge Wells with elder son and family knowing that MLO was being safely looked after back at base by younger son and co.

The next generation did the catering, cooking and shopping. All I had to do was eat and drink and there was, of course, plenty of both. Some of us swam (rather a good heated, covered outdoor facility) played table tennis, pool and other games. And there was a lot of sitting, chatting with cups of tea and wonderful homemade biscuits – with everyone working hard to include MLO and jolly him on as much as they possibly could.

Although we had masses of Golden Wedding cards which I displayed at the weekend (and still have “up” at home) most of the time MLO hadn’t a clue what we were doing and why we were there. “Well done for putting up with her for 50 years” said my sister, cheerfully when she kissed him goodbye on Sunday. Blank stare. “So glad to share your Golden Wedding with you” said younger daughter-in-law. Flash of understanding. “See you again at our 60th?” he said. Ouch. Momentary poignant pause. Does he really think we have another ten years together?  “Oh I think you might see me before then” she said with kind presence of mind.

As I drove MLO homewards on Monday morning I probed gently. “Do you remember what the weekend was really about?” He thought for some time before answering “Was it to get the family together?” Me: “Yes, partly a bonding exercise I suppose but one with a very specific point. Can you recall what that was?” I prompted for a while but in the end I had to tell him. Again.

All of this raises the issue of whether it’s worth celebrating an event in which one of the key participants doesn’t know what’s going on. Is it appropriate? Is it in questionable taste?  Well, the 18 other people who took part all had a good time and it’s important to build family memories. I love to see them all in the same place for a bit  too. It brings out the materfamilias in me and it doesn’t happen that often. The youngest two GDs (7 and 4)  fell in love with the  gloriously Blytonesque house, which was like nothing they’d ever seen before apart from on National Trust visits, and immediately named their atmospheric attic bedroom “The Harry Potter Room”. I expect they will remember celebrating Grandpa and Granny’s Golden Wedding in that huge and mysterious house with its exciting low beams, panelling, uneven floors and hiding places for the rest of their lives and I like the idea of that. 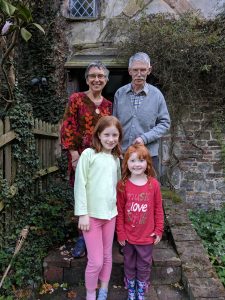