The high spot of this concert was the Budapest Café Orchestra Selected Medley when Christian Garrick, David Gordon, Richard Pryce, Tom Hooper, Eddie Hession and Adrian Zolotuhin played without the BPO strings who sat in rapt admiration. With lovely folksy panache they weren’t, at times, a million miles from the vibrant ceilidh band my dad used to lead. Rapport and exuberance, lots of shouts of “hey” with accelerandi to ridiculous tempi made it tremendous fun. The presto sections were interspersed with schmultzy slow bits and witty musical “chats” between players and all played without notation exactly as my father always insisted dance music must be. 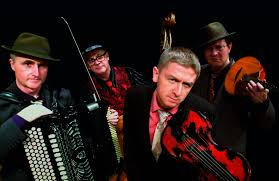 The rest of the concert consisted of a number of other pieces of different lengths, two composed by Garrick himself. Astor Piazzolla’s Four Seasons of Brighton Aires, which dates from the late 1960s in various forms is almost a concerto grosso. Garrick began by playing close to the bridge to create a scratchy sound and I admired his rhythmic harmonics. The Invierno movement is particularly listenable although it owes a lot to Pachelbel’s Canon and I couldn’t help wondering whether Andrew Lloyd Webber lifted one of the Jesus Christ Superstar themes from here. The piece also, played enthusiastically here, references Vivaldi.

John Dankworth’s Violin Concerto, written for Garrick has been performed only once before so perhaps I can be forgiven for never having heard of it. The most interesting thing about it is the way it uses amplified violin (Garrick also uses an acoustic instrument and a fully electric one in this concert) and provides plenty of scope for some fine virtuoso playing. Its components are a bit disparate however. There are some quite interesting passages but they don’t seem to flow one from another.

This concert was a new departure for BPO – presumably an experimental attempt to entice new audience members. Those who were there seemed thrilled with the programme but, sadly, the Dome was barely half full.