Christmas shows and all who sail in them

‘This the season to be jolly. And I saw and reviewed my first four Christmas productions last week: Evolution Pantomimes’s Cinderella at Marlowe Theatre, Canterbury, Plaid Tidings at Bridge House Theatre, SE20, A Christmas Carol at Chickenshed (image above) and The Night Before Christmas at Southwark Playhouse. The previous week took in The Wind in the Willows at Polka theatre too – all worthwhile shows in their very different ways.

I really like this time of year because if Christmas is about anything at all it’s about children and families and it gives me a lot of pleasure to see families out together enjoying themselves. This year – and I don’t often manage this – I have one of my grandchildren (the youngest) coming with me and her parents to see Sleeping Beauty at The Capitol, Horsham later this month. I review in a different way if I’ve had a child with me during the show. It changes my perspective.

I also like the variety. Pantomimes are Ok in their way and do the industry a huge service. They provide masses of seasonal work which sustains many an actor through much of the year. Often they offer a first professional job opportunity too, They are also, for many young audience members, a first experience of live theatre – good news from every point of view.

I’ve never been a fully committed Panto Person though despite having seen hundreds and hundreds of them in the last 20 years or so. Even as a child I used to sit there wishing that they’d stop the silly digressions and get on with the story. That’s probably why, to this day, it’s the story-driven Christmas shows which really work best  for me.

This year, for the first time in decades, I decided that I’d choose my own Christmas shows and arrange to review them rather than waiting for editors to impose them on me. And I’m having a lovely December so far: two A Christmas Carols, two stabs at The Wind in the Willows, a non-panto Peter Pan, a Nutcracker and lots of other seasonal delights still to look forward to.

Meanwhile I wish a very merry Christmas to all hardworking performers who are working flat out this month. Ben Roddy, Canterbury’s regular dame and an Ugly Sister this year, let slip during the show that it’s doing 93 performances.  Bravo to him, his colleagues everywhere and the extraordinary stamina they have. 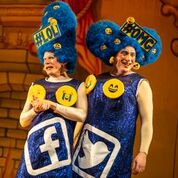 Lloyd Hollett and Ben Roddy in the 2018 Cinderella at Marlowe Theatre, Canterbury.