A day in the life of… Michael Volpe 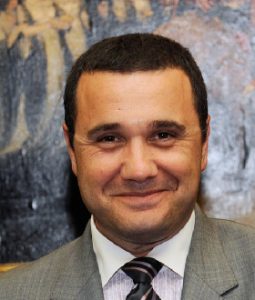 Michael Volpe is the director of Opera Holland Park but his background is unusual. He spoke to Susan Elkin

Tell me about your family and upbringing My parents were Italian immigrants. I’m the youngest of four brothers. We were very poor and I grew up on a Fulham council estate. Our dad left us when I was seven months old. My elder brother, Matteo spent a lot of time in prison. It was hard, rough and difficult but my mother worked very hard, defended us fiercely (sometimes literally) and faced the challenges indomitably. Her fight was a good fight.

So what happened to change that? I was selected via my primary school to attend Wolverstone in Suffolk. It was a grammar school – suffused with public school values and staffed by top notch teachers. Children from poor backgrounds but with potential were given the opportunity to board there. It was an experimental state school, long gone. Political considerations watered it down by making it non-selective and eventually it was closed.

Do I detect strong feelings about education? Yes, and they’re entirely apolitical. Learning for the sake of learning is vital. Nothing needs to be justified. Learning is much more important than any consideration of “relevance”. The present system overvalues rote learning and technocracy. Where’s the breadth? Scientists, for example, will be better at their work if they are also committed to literature and music. As it is, standards are being lowered all the time to demonstrate achievement. But we’ve become deeply scared of depth and what is perceived as elitism and I’m not sure we can put the bolted horse back in the stable. I’m wary of both the political left and the right on all this.

So you did well at Wolverstone? No, not really. I learned a huge amount and still find I know things that our wonderful teachers taught us. But when it came to O levels I made a conscious decision – very stupidly – that I wasn’t going to bother to apply myself to any of it. So I left without anything much in the way of qualifications. I talk a lot about this when I do aspirational talks in secondary schools today. The only person who can make any real difference to your life is YOU. So you need to get the very best you can out of the system you find yourself in and seize opportunities.

How did you get involved in opera? I’d picked up a liking for classical music at Wolverstone although I’m not a musician. And of course, I still feel Italian. I founded Opera Holland Park in 1996 and for a long time it ran as a summer festival managed by the borough. Today it is an independent entity supported by the borough and other sponsors.

How does it differ from other opera companies? We wanted to give emerging, British-based performers the opportunity to sing and work with more experienced and established artists. We still retain that ideal.

How easy was it for you to be accepted by the world of opera? Well I was ALWAYS right. And I was an unusual beast: forthright even cheeky to the politicians and never afraid to tell them categorically what I believed they should do, but I was loyal, honest and dedicated. It was those qualities that I think stopped them from booting me out. Ideas were never a problem for me. The strategic patience to deliver them (and to gently coax people into sharing my vision) most certainly was.

What does Opera Holland Park do to support education? As much as we possibly can within the budget constraints, because of course I want opera to enhance everything kids are studying and to deepen understanding across the board. Our production of Alice in Wonderland, for example, can lead to learning about music, literature and history. And workshops relating to it develop confidence, presentation skills and critical thinking. We have an education manager and there’s a huge variety in the work.

So what does that variety involve? There are schools’ workshops relating to every production and next year there will be a school’s matinee of Carmen. Kids that come will have worked on their own versions of songs and scenes and designed a poster – among other things. Sometimes opera can work where nothing else does. They’re an amazing bunch of kids. They recently wrote and performed a mini-opera.

Is it difficult to get schools involved? Sadly, yes it is. They have curriculum driven time constraints and often there’s no one in the school with the vision to understand that opera is an invaluable enhancement rather than a distraction. It’s particularly difficult to reach Key Stage 4 and beyond and the groups which are the most disadvantaged.

Would you like the last word on education? Thanks! I think every child should have an hour of culture in school every week from age 5. Children who grow up with, say, symphonies are perfectly well able to cope and it doesn’t mean they can’t listen to lots of other stuff as well. It teaches them to listen, analyse and draw parallels among a million or so other skills. What’s not to like?

Michael Volpe’s book Noisy at the Wrong Times: The story of a boy who didn’t know his place (2015) is published by Two Roads.