Dealing with grief and a loved one’s effects 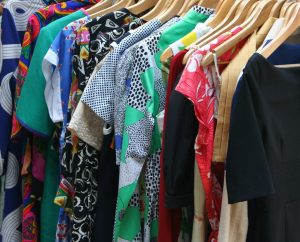 NOTE: I wrote this piece in 2001 a few weeks after my mother died.  For various reasons – not least because I was feeling pretty low and it was all a bit raw – I didn’t publish it at the time. I’m sharing it now in the hope that it will help others currently in the same position.

Rummaging through someone else’s drawers – both the in-a-chest and the underwear sort – makes you feel like a cross between a burglar and a ghoul. But, of course, when a parent or  anyone for whose belongings you find yourself suddenly responsible, dies, that’s what you have to do.

If you allow it to be, it’s a sad, grisly business. My widowed mother died in February, having lived independently and alone until she was admitted to hospital following a stroke five weeks before her death. So the house was as she left it – teacups still inverted on the draining board,  full ashtrays in the sitting room and half-used jars of jam in the cupboards.

For me the most poignant things were a bedside book with her bookmark still in place, a half- done jigsaw on the dining table and her day-to-day engagement diary propped in its usual place on the side.  Pause for a tearful smile – how splendid that she was well enough to read books, do jigsaws and have commitments almost until the end, I tell myself.

Walking into her home with a key felt simultaneously very familiar and extremely peculiar. And it was a while before I could bring myself to touch anything.  But, of course you have to.  This house must be emptied and then sold. Everything in it must be disbursed amongst my sister, my mother’s sister, me and our respective children, or sold or disposed of.  So black bin bags, labels and notebook to the fore I decided to start in the bedroom.

I suppose you could cop out and get a dealer in with instructions to clear the lot – but it wouldn’t be very wise. Neither would it be sensible to bin the contents of whole drawers without going through each item.  In my mother’s top dressing table drawer, lying amongst the sticky and dusty lipsticks, I found a lovely old gold chain which has been in the family for several generations. I suppose she had just taken it off one evening and thrown it in the drawer without putting it away properly.  She knew where it was, after all.  ‘But I knew you’d go through it all Dear so it didn’t matter did it?’ I can hear her muttering, as I mentally tell her off.

‘Just look at all these lighters, Mother.’ I find myself having more and more in-my-head conversations with her as I collect enough throw-away lighters to fill a supermarket carrier bag. I found them in every pocket, bag, drawer and corner, especially in the studio where, as a professional artist, my mother worked.  There were even a couple in the greenhouse.  ‘I bet you didn’t know you had so many!’ I visualise the cross defensive shrug I always got if she thought I was criticising her smoking.

And vases. Big ones small ones, round ones, tapered ones, squat ones, glass ones, pottery ones.  She was keen on flowers which she used for both pressing and painting. Eventually I took a lot of these home and dotted them around my own house – fourteen at the last count. If only someone would give me some flowers to put in them. Unfortunately I haven’t inherited Mother’s artistic talents along with her vases.

Although my mother was, like me, very much a clothes person with a keen eye for colour and, in her prime, an indefatigable passion for shopping, I would have said that she had scaled her clothes down in recent years. But I’d have been wrong.   I filled eighteen black plastic sacks with skirts, trousers,  blouses, coats, suits and the like to take to the charity shop. (Rueful reflection – if someone had to this with my clothes as things stand, in comparison, I suppose they’d fill 100 bags)

Should I keep any of Mother’s clothes? ‘For goodness sake don’t send that to a charity shop you silly girl. I’ve never worn it and they’ll sell it for hardly anything,’ I can hear my mother’s voice in bossy-maternal mood addressing her 53 year old daughter. So I decide that perhaps I’d better hold on to the odd pair of gloves or a scarf that she was given for Christmas less than two months before her death.

How tactful she has clearly tried to be too.  Revlon’s Charlie was ‘her’ perfume, so we’d all been routinely giving it to her for birthdays and at Christmas for years. ‘Thank you so much Dear, she’d say politely to the donor. ‘My favourite!’ In her house I found nine un-opened packets and several on-the-go bottles. The rate of receipt evidently outpaced the rate of use. Silly. Perhaps she would have liked something else for a change. More in-the-head conversations.

You go though life thinking you know your parents well. Then one day they’re gone and you realise just much you didn’t actually know about them. Things tell stories. There were love letters and air force wings because my parents met during the war when my father was a serviceman. Ribbons, buckles, corks and pressed flowers – evidently keepsakes but what events do they connote?  We shall never know now and perhaps it isn’t our business anyway.

Photographs probably speak loudest.  And finding a box of old pictures or an album is a sure fire distraction from the hard graft job of trying to get rooms clear. My father was a life long enthusiastic amateur photographer and, in Mother’s house, I found  literally hundreds of family pictures, many of them taken before my birth and which I don’t remember ever seeing before, Treasure trove indeed.   So I bring them home where they sit quietly in a large box, mothballed  with good intentions that I will label as many of then as I can so that my children will know who and what they are.

Actually when you get going this isn’t really such a  sad job.   There was a lot of laughter too.  I lost count of the times I found myself sharing a ‘Mother, how could you!’ joke across the barrier of death and separation. Perhaps saying good bye as you unravel a home and a life is the last stage in getting to know someone.

Susan Elkin’s advice to anyone who has to clear out the house of a deceased loved one: