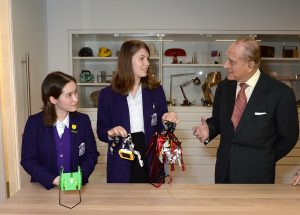 Anyone who remembers the old Commonwealth Institute in Kensington will be delighted that – at last – the building has been rescued and restored to glory. Architect John Pawson has used the iconic shell as a framework for the Design Museum’s spacious (10,000 square metre) new home.

A mass of glass, oak and space, the new venue is three times larger than the museum’s former home in Shad Thames. “We are absolutely thrilled with our new learning spaces” said Head of Learning, Catherine Ritman-Smith showing me round on the museum’s press day in November. There is a roomy casual area in which children and young people coming in pre-booked school parties can eat their packed lunches, listen to informal talks and so on. Then there are practical work rooms – all suffused with natural light where young learners can experiment and familiarise themselves with design principles.

Elsewhere in the building permanent and temporary displays make the point that every manufactured item we use – maps, musical instruments, kitchen equipment, computer programmes, clothes and much more – has been designed. Design is an essential art form. One of the museum’s most memorable sections is a crowd-sourced wall of exhibits. It’s intended to be a diverse selection of 200 objects and included are items as various as a Bible, a Coca-Cola can, a pair of rubber gloves and a plastic garden chair. The London Underground roundel is there too, selected by the Mayor of London, Sadiq Khan for its bold simplicity. No wonder Sir Terence Conran, founder of the Design Museum hopes excitedly that this “magnificent new cathedral of design” will “educate, inspire and delight future generations for years to come and truly make a difference to the world around us.”

There’s a Design Museum Shop downstairs which has another branch on Kensington High Street. Last summer you might have bought there – for ten pounds – a children’s game. It included a wind up mechanism, track complete with lots of stickers and some propulsion. Good fun, simple and very original.

This item was the culmination of last year’s Design Ventura project – the biggest thing the Learning Department does. It’s a design competition for secondary schools which attracts hundreds of entries and last year’s winners were six Year 9 and Year 10 boys from Finchley Catholic High School under the guidance of curriculum leader Design Technology, Liam Hourican.

Catherine Ritman-Smith, Head of Learning tells me that around 10,000 participants aged 13 to 16 are taking part this year and that the project is, as usual, generously funded by Deutsche Bank. “Teachers like it because the skills are all transferable and it helps to validate the value of design as a subject” she says, telling me that nearly 600 schools have taken part since the Design Museum launched the competition in 2010.

This year’s theme, announced last summer, is “change”. Students worked last term in groups to produce imaginative design ideas for a product in simple materials which could sell for £10 in the Design Museum Shop. Participating schools then registered by November – there is no charge for taking part – and eventually submitted their design ideas. The final shortlist of ten present their ideas to a panel of top-notch designers such as Naomi Cleaver and Yen before a winner is selected.

Along the way comes training and support for teachers, mentoring for students from designers who really know their stuff. And the icing on the cake is that when a winning idea is eventually chosen, it is developed and made for sale in the museum shop in the spring of the following year. So there will be a lot going on this term. Entries for the next competition will be invited in autumn 2017. Meanwhile look out for this year’s winning design in the museum shop in a few months’ time.

Hourican and his pupils have happy memories of spending a whole day at the Design Museum as one of the shortlisted schools presenting their idea to a panel of judges including Jasper Conran. Then they worked with the designer Yen in Shoreditch, met designers back at their own school and attended a productive canteen lunch with committed and enthusiastic Deutsche Bank employees. “The students helped to make decisions and there were plenty of good discussions – they had to change the product’s name, for example. “One of the really useful things about this competition” says Hourican is that there’s a commercial element because the product is going on sale for real and the boys had to learn about budgeting and marketing as well as designing their game”

Profits go to a charity chosen by the winning team. The Finchley Catholic High School product raised about £1000 for Great Ormond Street Hospital, for example.

“Design Technology has become a tricky subject to make a case for and we’ve heard of departments closing in some schools.” Says Ritman-Smith. “We find that if pupils take part in Design Ventura in Year 9 it can be the trigger which leads them to opt for it at GCSE so we are helping to keep alive something which is crucial to industry and entrepreneurialism.”

The 2017 deadline for schools to register for Design Ventura will be in November ventura.designmuseum.org

Only schools many enter groups. The competition is not open to individuals.