Drama school training sets you up for life too

They’re on the home straight. Thousands of school leavers, post-gappers and post-grads are heading for drama school or drama course in universities next month. All that tense worry about auditions, recalls and nail biting anxiety while awaiting that letter offering a coveted place (or not) are behind you. A level and other results are due next week but for many they won’t affect anything much. The place is in the bag.

For a week or two it must have felt like the culmination of a long process. I’ve talked to students who have persevered with applications over several years before finally securing an offer. One student at Manchester School of Theatre told me cheerfully that she could probably have sustained a mortgage on what she’d spent on drama school audition fees.

In fact, of course, getting a place is the beginning and not the end at all. It means you’re heading for training which is so rigorous, intensive and different from anything – absolutely anything – you’ve done before that you and your life are about to change irrevocably and permanently. Even if (heaven forfend!) you never get a single professional job as an actor you will be a transformed person, both mentally and physically, after this far-reaching training.

For a start there’s the hard work and discipline that you’re about to experience. Most colleges have zero tolerance policies on punctuality. A 9 am start means just that and if you get there at 9.05 the doors will probably be shut which means you are letting down everyone in your group. And, typically you’ll be hard at work until 6.00pm or maybe longer if there’s a show in preparation. You’ll have to do homework too. Three years of that and you’ll never have any problems with the work ethic – which is one of the reasons that I would employ a trained actor to do almost any job.

Actors in training also learn to collaborate with each other – all day every day. Trust and mutual support underpin everything they do. Then there are the more obvious transferable skills like being able to communicate with clarity and confidence. Oh yes, three years at drama school will make you employable, all right and let no one tell you otherwise. I hope very much you’ll find acting work, obviously, but even if you don’t, then with your talents and training the world is your oyster anyway

But none of this comes without tremendous single-minded commitment so you’d be well advised (when you’re not busy earning money to help fund it all) to spend some time with your family and friends now because you won’t see much of them next term. Get as fit as you can too – regular healthy meals, exercise and enough sleep – because the training can be a bit of a shock to the system especially if you’re feeling sluggish before you start. And if you have time to read some novels and plays then that will stand you in good stead too. 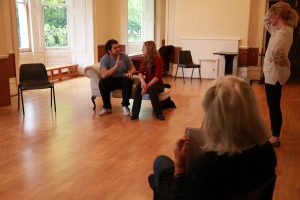 Starting to train vocationally at what you’ve wanted to do for so long is probably the most exciting thing which has happened to you so far. Make the very most of it. And I’ll try to contain my envy.