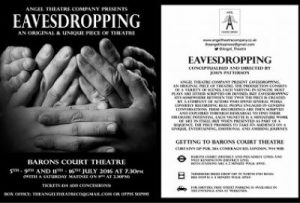 This is verbatim theatre taken more literally than I’ve ever seen it. A series of short scenes – some no more than two or three sentences and others rather more sustained – are based entirely on words spoken by real people in real situations. We’ve all smiled at, or empathised with random eavesdroppings. Here, director, John Patterson and his cast of eight have turned a collection of them into 90 minutes of theatre which flows remarkably well considering how bitty a concept this actually is.

Thus we get a pharmacist advising a customer with a burn, banter in the hairdressers, two laughably self important men discussing designer shoes in a gym changing room, a pub scene where two older women are showing off to, and deliberately embarrassing a younger man, a pair of builders resolving a domestic problem as they work and much more. It’s the stuff of everyday life, sometimes wryly funny, occasionally hilarious and often poignant. Especially memorable is the concluding monologue in which Jack Cronin, who can cry real tears in role, presents a gay, apparently unloved suicidal man. It’s warmly powerful and deeply moving.

The basement playing space at Barons Court is very small which means that there’s much intimate immediacy in this show. The actors are never out of sight but simply retire to auditorium seats when they’re not on stage presumably because there is nowhere else for them to go. The cast of eight rise to the challenge off having to work quasi-televisually and all the acting is truthful and convincing. It isn’t easy to switch role and voice instantly and to do it many times in 90 minutes but these eight are very accomplished. I particularly liked the voice work by Anna Bonnett, for example, at one point the Eastern European daughter of a woman dying in hospital and at another a middleclass client having her hair done, among other roles. Stephanie Manton and Lara Bell are both admirably versatile too.
Angel Theatre Company exists to create opportunities for young actors to perform professionally during their first year out of drama school and it is clearly doing what is says on the tin. I just hope that lots of agents and casting directors see this show and that these actors are offered further work. They certainly deserve it.