I’ve been listening to Tchaikovsky all my life and I still marvel at how he does it: melody after soaring melody. And of course he’s at his sparkling best in ballet with all those waltzes, mazurkas, hornpipes, martial interludes and the rest, all sumptuously orchestrated. 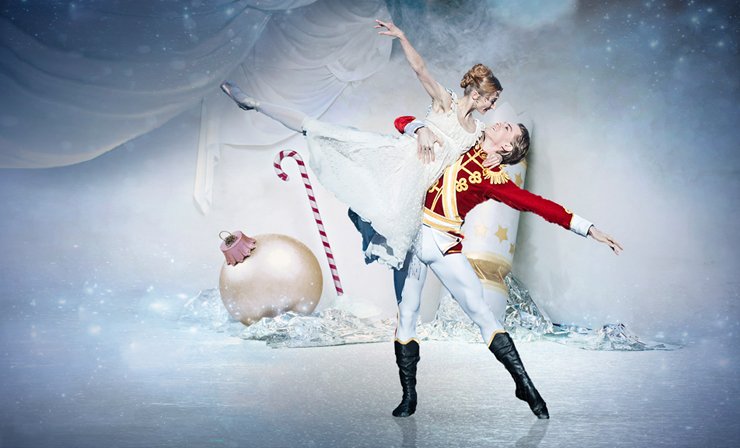 However well you know it, and however popular it is, the Nutcracker score is, well, a cracker and it’s in very capable hands with Gavin Sutherland and English National Ballet Philharmonic in this production which dates from 2010.  After a slightly shaky, thin textured start on press night the orchestra quickly settled to produce a rich, crisp sound. Sutherland takes most of the set pieces in Act 2 at a slower tempo than many conductors which means that every little bit of orchestral detail is made to shine through. The rising scales at the beginning of Act 2, for example, pack real drama and the trumpet in the Spanish dance beams out. And he makes sure that we are all very conscious of the musical chemistry between the celesta and bass clarinet during The Dance of the Sugar Plum Fairy.

Meanwhile there’s some very pleasing work on stage too. Wayne Eagling’s choreography and Peter Farmer’s designs give us a strong sense of the family home which frames the action – its exterior, inside for the Christmas party and the intimacy of Clara’s bedroom where the child falls asleep and begins to dream.

Shiori Kase is delightful as the adult Clara who becomes the lead dancer in the dream sequence. Her pas-de-deux with Guilherne Menezes (also excellent) is both spectacular and elegant – and, of course, accompanied by, arguably, the best music in the piece with that stupendous timpani roll at the climax, impeccably played here.

The children (from Tring Park School for the Performing Arts and English National Ballet School) do well too especially in the formation dances at the party in act 1. And they form a choir in a side balcony for the continuo section in the big Act 1 waltz. Of all the children Noam Durand as Clara’s naughty little brother, Freddie, is the most engaging.

Junor Souza is an imposing Drosselmeyer dancing with Clara – sometimes in a trio with the Nutcracker – but there’s a narrative problem. The whole point of the Act 2 set pieces is that it’s all a treat for Clara. If she’s off stage – as in this production – then you would be forgiven for wondering why Drosselmeyer suddenly morphs into a faintly menacing impresario. But it’s a minor grumble in a production which is full of colour – both visual and aural – and warmth and imaginative ideas.

No Christmas is complete without a good Nutcracker. And there are a number around at the moment. This enjoyable one will do me very well for this year.