An Elkin Christmas is not complete without a good Nutcracker and a decent Messiah (latter next week although I’m not reviewing it). There are several Nutcrackers in town at the moment but this rather sumptuous offering from English National Ballet, first staged in 2010, more than ticks my boxes with its puppet theatre, hot air balloon and red-eyed mice. 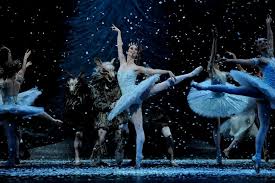 I have long thought that Tchaikovsky’s Nutcracker score is one of the most evocative ever written not least because of its sublimely colourful orchestration. Gavin Sutherland and English National Ballet Philharmonic make a pretty good job of delivering it, helped by the Coliseum’s generous acoustic. You can hear all the detail played from different corners of the pit from the pianissimo filigree string work in Waltz of the Flowers to the bass clarinet in The Dance of the Sugar Plum fairy. Every note is allowed to tell its own story.

This is a pretty conventional Nutcracker in that the framing device is firmly in place. We begin and end in Clara’s bedroom. Children (Tring Park School for Performing Arts) play the young Clara and Freddie. Others from Tring Park, who also form a choir, and young dancers from English National Ballet School appear in some of the ensemble scenes.

Rina Kanehara as the “adult” Clara looks very childlike but dances with mature assurance. Partnered by Fernando Carratala Coloma as the Nutcracker Prince, she is a compelling performer. Both dancers make leaps and lifts look effortless. Kanehara gets a spontaneous round of applause for her sustained pirouettes and her Sugar Plum lives up to its name. Coloma is immaculately lithe spending more time airborne than on the ground in his two Act 2 solo spots. I really admired their pas de deuxtoo – charismatically danced against Tchaikovsky’s heavy brass alternating with piccolo.

There’s some lovely work from the corps de ballet in this production too with an especially attractive pink-tinged Waltz of the Flowers. Wayne Eagling’s choreography is particularly fresh and interesting here with lots of sweeping shapes and formations.

Amongst the set pieces presented by Drosselmeyer (Fabian Reimar – good) the exciting Spanish Dance stands out. And the Arabian Dance is as silkily seductive – leaning into the minor harmony – as I’ve ever heard it. Most of these dances were taken at sedate tempo which enhances the music but requires and gets even more control from the dancers than usual.

I’m struck too by the way the industry has progressed to enlightenment in recent years. No longer, it seems, is absolute uniformity of height and build imposed on female ballet dancers. Some of these women are taller than the men they’re dancing with and of course it matters not one iota. I smiled happily through every bar and step.