For a production that has been around since the mid-1980s Jonathan Miller’s Mikado is vibrant, fresh and fun. Elaine Tyler-Hall has clearly made an accomplished job of reviving it.

So what distinguishes it? The traditional trappings have gone and we’re in a 1930s hotel although the material is so strong it really doesn’t matter where you set it. It’s a visual feast of black and white and it is a feat of directorial genius to have a troop of twelve dancers in addition to the singing chorus because it enables all sorts of sparky choreography with the tap dancing in both finales being a real tour de force. 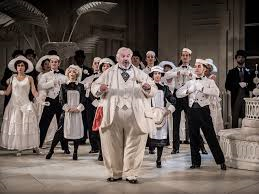 Interestingly though, Gilbert’s libretto is almost intact with only very minor adjustments such as the substitution of a “slow suburban” train for the now meaningless parliamentary one. In general it’s still as funny as it ever was and it’s good to see that respected. It’s also pleasing to hear people, who presumably aren’t particularly familiar with the piece, laughing not just at performers doing clever things but at Gilbert’s wit.

Richard Suart is back in harness writing a new “Little List” for every performance and of course it’s a show stopper. He knows how to squeeze every ounce of humour from every nuanced word of the rest of his part too and looks suitably absurd with that floppy back wig centrally parted. John Tomlinson looks suitably tyrannical in a colonial white suit and Panama hat, his enormous stature dwarfing everyone on stage. His gravelly bass voice is just the job too.

There are no weak links among the principals – this is ENO after all – but I think it’s the quality of the choral singing which really makes this production stand out. Every note of the harmony is gloriously incisive and resonant.

It’s also a joy to hear Sullivan played by such a large and competent pit band (Conductor: Chris Hopkins) which brings out the musical jokes as well as playing the whole score beautifully. I was also delighted to be allowed to listen to the overture properly too, without the visual trappings most directors seem to clutter it up with too.

As a production, the performance I saw was hugely enjoyable but not flawless. Because Richard Suart has to read his List – or at least consult his notes – presumably because he hasn’t had time to learn it, he and the orchestra were seriously out of sync. There were timing problems in The Mikado’s song too and in one or two other places. These are very minor gripes though. It’s a magnificent show