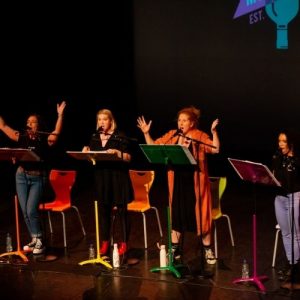 An Evening With The Good Enough Mums Club was reviewed at the Pleasance Theatre, London. The show can also be seen at the Mast Mayflower Studios, Southampton on 6 May 2022.

Emily Beecher’s show, with songs composed by Chris Passey, has been in development for ten years. Next year, she told the audience with a gulp, it is – at last – to be fully staged.

Meanwhile here’s a taster, cabaret style, participative and more like a presentation than a show, although all five cast members (and the all female on-stage band) get the chance to showcase their considerable talent.

The thrust of The Good Enough Mums Club is that many women find motherhood pretty difficult, especially at the beginning. It can be isolating. Feelings of inadequacy are almost inevitable ….

Read the rest of this review at Musical Theatre Review: https://musicaltheatrereview.com/an-evening-with-the-good-enough-mums-club-pleasance-theatre-and-touring/