What are you supposed to feel at the funeral of a dearly beloved partner with whom you have shared over half a century of your life? Devastated, is the answer in my case. All the strength, urbane front and cheerfulness that I’ve paraded for the last three weeks suddenly evaporated as I stared weeping at the beautiful wicker coffin, topped with white lilies, which I’d chosen.  The enormity of my loss suddenly hit me like a sledge hammer and the one person who could, once, have comforted me wasn’t there.

But funerals are about shared grieving, letting go – and of course, celebrating a life well lived. It was, therefore, utterly wonderful to see, in the congregation, so many people from so many aspects of the life Nick and I enjoyed together for so long: a unique, eclectic and rather special group. I was flanked by my sons, and three of our four granddaughters (GD4, aged 4, had gone to nursery as usual) and our daughters-in-law. The rest of the  family – including some gloriously extended bits of it – was very well represented. Also present were three of my editors and one of the carers who helped me look after Nick at home during the last months before he went into hospital. Then there was an old school friend of Nick’s and his wife along with a former student of mine and her infant son, my younger son’s lifelong friend, two neighbours and a friend of a (very old) friend who happens to live locally. They had come from all over the country. There were, inevitably, many more people who couldn’t for personal, professional or geographical reasons be with us on the day. Right up to the last minute I was getting loving messages from Italy, America, Australia, Yorkshire, Somerset, elsewhere in London and many more.

The service was magnificently led by a school friend of mine, one of the first women in the country to be ordained.

I’m not a conventional religious believer and neither was Nick. Although we met in a church youth club and both came from church going families we rejected the doctrines and trappings before we were out of our teens. Nonetheless, these days, I can go along with some sense of a force of love and goodness in the world and it was very much in evidence at Nick’s funeral. I could feel it, palpably buoying me up as I mopped the (many) tears.

I loathe the clinical, fake tastefulness of crematoria. They exist for one purpose only: processing the dead. And I wanted something warmer, less rushed and more rounded than that for Nick. So we went back to St George’s Church, Forest Hill where we were married in 1969. Structural problems led to the demolition of the old Victorian barn of a building fifteen years or so ago. The airy modern church built on the same site, but incorporating the original stained glass rose window, is stunningly beautiful and it felt absolutely the right place to be. Inevitably there were at least eight people present who also were at our wedding, fifty years ago including the best man and all three bridesmaids. Rather a lovely bit of continuity.

I asked people not to wear black and the sun was shining merrily so the atmosphere was light and bright.

We played five pieces of classical music which Nick might have chosen himself, ranging from the poignant to the upbeat, and included some silences for reflection. Felix read a Hilaire Belloc poem. Bernard, Nick’s first cousin,  read a Christina Rossetti poem and Lucas delivered a beautifully thought out eulogy which really paid tribute to Nick’s varied life along with anecdotes about spilled honey, dishwashers and socks which had to be drawer-filed in colour order.

The trick, of course, is to try to stop thinking about illness, that hideous cow Ms Alzheimer’s and the ghastliness which beset the last few months. Instead you have  to make your mind leapfrog back to happier times. The montage of photographs Felix set up on a loop at the reception (I hate the word “wake”) was a brilliant idea. I had forgotten Nick showing us on visit to Dover Castle that, yes, he really had learned – at a yoga class – to stand on his head. There were pictures of him at all ages and stages – often with cats and or babies. Or me. Or his parents. Or with one of the many cars he owned over the years. It made a good focus and talking point.

So now I’m a widow, trying not to weep too much because it makes me feel so wretched. My new life starts here. It’s unknown territory and I don’t know how it’s going to pan out. I shall carry on working. I’ve never wanted to retire and I want it less than ever now. Working makes me feel part of the real world and reminds me that I still have a purpose in life. I also have some holidays planned and lots of invitations to spend time with friends and family.

The psychological effect of a funeral is odd though. It’s like a door finally, finally slamming. It’s bleak. Nick ceased to exist on 20 August and I was very rational about that. I now realise, though, that in a sense he wasn’t quite gone during that limbo period. He is now.

So this is the last of these Alzheimer’s blogs. Thank you for staying with me for so long. Over and out.

Main image. At the church door. Resolutely no black “Smile. You’re enjoying yourselves” as Nick would have said as soon as someone produced a camera. 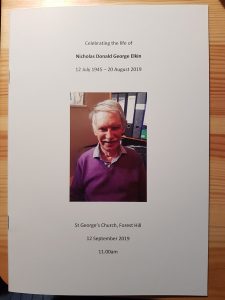