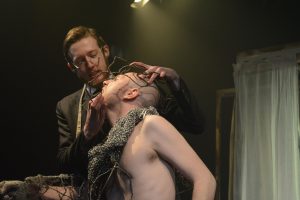 It is less than a month since I wrote http://susanelkin.co.uk/articles/time-disband-drama-uk/ in which I argued for the winding up of Drama UK. I didn’t expect it to disappear round the U bend quite so quickly but it is now dead. Drama School principals, one of whom forwarded it to me within minutes, received an email to advise them of Drama UK’s closure  last Monday. So it’s time they took down the website which is still gleaming with promises at the time of writing.

Well I don’t know at what stage in the year the £6,000 membership fee is due but, if some of these schools have already handed over their students’ money, then I hope they get a refund promptly. But I’m not holding my breath. The chances are that any money in the coffers has already been squandered on dubious projects in China and Ireland.

Did I say “dubious”? Well yes. I learned recently, for example, that if as a newish graduate you opt to take part in one of Drama UK – now trading under a different name – showcases in China or Ireland you have to pay £150 for the privilege. And a reliable informant who asked to remain anonymous has expressed very serious worries about safety and the way things are run at these over hyped events. The word “lies” was used more than once in the emails I saw.  It is all very alarming to think that vulnerable new graduates, many of them very young and inexperienced, are being exploited in this way by the very organisation which was ostensibly set up to protect their interests.

Meanwhile back in Blighty, the unlamented demise of Drama UK means that there is no longer any such thing as an accredited school or course. How much does that really matter? Agents tell me that some companies and casting directors,, refuse to see anyone who hasn’t trained on a two or three year course at an accredited school. Could the demise of Drama UK help to dent that ridiculously old fashioned and blinkered attitude?

Outstanding newish training organisations such as MTA and Fourth Monkey, which have steadfastly refused to associate themselves with Drama UK, are turning out dozens of industry ready young professionals every year. Their percentage of graduates signed to agents and in work is much higher than for some of the formerly accredited schools, many of which don’t even bother to track their alumni accurately anyway.

The playing field has now, I think, levelled a little. Agents will need to work very hard to persuade companies and casting directors that a good performer is one who can do what the role requires. All schools are now unaccredited. It doesn’t matter a bit whether Sherman Smith or Mei Ling trained at the Royal Something of Whatsit or at a school which was founded within the last decade. Proof of the pudding and all that.

Of course, there are ropey schools out there too whose graduates are likely to be less talented and less well trained and therefore not up to the job. Agents, in general, know better than to sign them up and perhaps this is the moment to become even more discerning. That’s a sad tale of exploitation – and another blog for another time perhaps – but these people are unlikely to find themselves at auditions wasting the precious time of casting directors so what’s the problem with casting (literally) the net wider?