Temple Church, with its lofty fan faulting and intricate stained glass glinting in the early evening sunshine, is a magnificent setting for a concert. And this performance of Haydn’s colourful masterpiece, sung in English, certainly did it justice – in memory of Jonathan Hirst QC who died last year and whose chambers, Brick Court, sponsored the event. 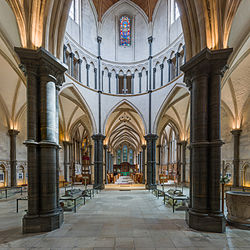 Temple Choir, which has in recent years made quite a name for itself, is authentically male with 12 choir men and 18 choir boys. They were ably accompanied by Outcry Ensemble whose string work is commendably crisp. It’s an unusual idea to place the timps at the back of the choir so that the singers acted as a muffler but it worked.

Roger Sayer, director of Temple Music, has a real passion for detail and the clear, revealing acoustic of the building allows him to fulfil it. From the first bar of the introductory Representation of Chaos, he ensured that we heard every note from every instrument. Later he and his musicians had such fun with Haydn’s witty sound  effects that the audience chuckled aloud at the “flexible tiger” and the stress on “long” and the evocative bottom E for the worm sung by bass, Jimmy Holliday. Another lovely moment was Holliday’s rendering of the descending fourths in Rolling in Foaming Billows with the flute weaving underneath.

Tenor Guy Cutting sang with lyrical warmth and terrific dynamic control especially in “In Native Worth and Honour Clad” and soprano Augusta Hebbert was  delightful in part three when she and Holliday sang their section as Adam and Eve with sparkling smiles to remind us that this is a freshly minted young couple in love. Their voices blended well because each singer was totally attuned to the other.

There was some fine singing from the choir too. Sayer clearly has a terrific rapport with them, conducting without baton and mouthing words. I particularly admired the way they did the Spacious Firmament fugue with energy that lasted right to the end and included a magnificent crescendo. It’s a testing sing for any choir and more often than not flags long before the last note.

Given the effort which had clearly gone into one of the finest – and certainly the most sensitively dramatic –  renderings I’ve ever heard of The Creation, it’s a pity they didn’t hire a harpsichord. Of course Greg Morris played the recit passages more than competently on piano but it sounded far too plummy for music of this period. It didn’t spoil it because everything else was so beautifully done but it would have been even better with harpsichord.