Last week we – My Loved One, Ms Alzheimer’s and I – went on holiday. I hired a cottage, a converted stable attached to a multi-use farm on the outskirts of Hexham, and drove 300 miles north to get us there.

I’m nervous about holidays these days not least because it’s pretty tricky to find something which will work for our present situation. In the fairly recent past we’ve driven round America, South Africa, Australia and Malaysia and loved it. We also like city breaks in Europe and beyond and rural retreats in the UK.  Neither of us likes groups or organised tours of any sort.

Now, suddenly, none of the things we’ve always enjoyed is quite right. I was prepared, however to try the UK self catering break once more because I’m trying to accede to any wish MLO expresses. Loss of interest in activities and hobbies is part of the disease and it’s an increasingly evident symptom so I was delighted when he said firmly that he’d like to revisit Cragside which has long been our favourite National Trust property.  Pity, then, that it’s in Northumberland, and we live in South London but I decided it was do-able and booked the accommodation near Hexham.

The journey up was a nightmare. Including a very welcome two hour break with a dear friend near Northallerton who provided lunch, respite and a bit of sanity, it took 11 hours – traffic hold up after hold up. Moreover, taking MLO anywhere is exactly like taking a rather tiresome child out. He needs frequent loo stops and lavatories in service stations are never situated for the convenience of customers. I reckon – and I’ve timed it – that by the time you leave the motorway, drive round a roundabout or two, get parked and traipse across the car park and through the building it’s a minimum of 20 minutes. I try not to get exasperated (and yes, since I bet you’re wondering, we do keep an emergency receptacle in the car) but I frequently fail. Fortunately the drive home a week later was free of hold-ups, much easier and quicker.

The accommodation – nicely done up with splendid views down the valley – was all on one level but because this is hilly Northumberland it was on a quasi-terrace with steps up to the door and the new MLO makes very heavy weather of steps. This is, I’ve learned, a recognised Alzheimer’s symptom called “visuospatial difficulty” on one website I consulted.  It meant I had to do all the loading of cases, boxes and so on in and out of the car (I used to have a bit of back trouble but it seems to have gone away –  a case of finding strength when you need it?) as well as leading him by the hand up and down the steps every time we went in or out.

The Cragside day was great. For a start, and I think this was my fifth visit, it was the first time either of us had been there in sunshine. We both gasped at the house and its contents in delight as usual and marvelled at the astonishing views down the slope from the windows. Then we tried to walk round the nearer grounds. The place lives up to its name and the descent to Debbon Burn, the river hundreds of feet below the house, is via rough steps formed of big flat boulders. MLO took one look and decided, wisely, that he could no longer manage those. In the end – well done, National Trust – we found a cindered path intended for wheel chairs (new, I think, since our last visit) which enabled us to get down the iron bridge across the burn. We also walked through the pinetum which has conifers as tall as the redwoods we’ve seen in the US – they grow from the burn-side almost to level with the top of the house above. Yes, it really is quite a place and MLO was smiling quite cheerfully for most of the time we were there. 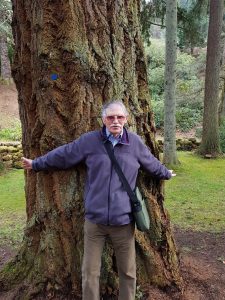 Often though, on other days, he looked fed up and uninterested. And it’s quite impossible to get him to think about or discuss plans for what we might do. So I say things like: “I thought, tomorrow, if you’re agreeable, we might go south to the Bowes museum ?” or “I think we’ll go into Newcastle by train for the day. OK?” He always agrees because, like an obedient child, he wants to please me but I know jolly well his heart isn’t in it. So we do whatever I’ve decided which usually ends up as little more than quite a lot of slow trudging although occasionally something nice happens such as my spotting a pretty vase in a Corbridge craft shop and his saying (relatively)  brightly “I could get that for your birthday”. Said anniversaire isn’t for another six weeks but he’s clearly fretting about it already which means that the date has yet to fall off his brain’s hard drive. His bank card was produced and I have the vase.

Then there’s the tiredness. By early afternoon, whatever we do – and it isn’t often a lot more than having coffee, a stroll and eating lunch – he’s flagging. Back at base, my routine was to settle down in the late afternoon to do a couple of hours’ work. Try as I might I hadn’t succeeded in clearing the decks completely before the holiday and I had five features to write while we were away. In the times gone by MLO would have objected to that and grumbled at me. Now, I think he’s quite grateful because if I’m busy writing I’m not making any demands on him.  I’d work at the dining table on my tablet with keyboard while he settled on the sofa with The Times on the other side of the room. Within minutes he’d be fast asleep and Ms A would be leering at me gleefully over his shoulder.

It was a pleasant break and generally I’m glad we went although I was relieved to get him home safely because it’s feels like a lot responsibility to shoulder on my own.  He was pleased to be home too – and managed to redeem a bit of self esteem by unloading the car single handedly because it’s all on the flat and I can back right up to the front door.

So what next? Is there anything else MLO would especially like to do? He has mentioned Vienna and a concert in the Musikverein. He has also talked about going back to Washington DC and staying in Georgetown which we both liked. I’m not at all sure about either although I suppose I could book assistance at airports and on flights. Or we could just stay at home. But I worry that if he spends too much time there he will lose even more interest even faster. Decisions, decisions. 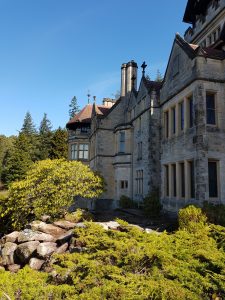