This warmly engaging show is a one-man, song-based autobiographical piece. First aired in 2014, it was originally produced at Manhattan Theatre Club and toured all over the US with the author/composer performing it himself. The 2022 revival features the very talented Max Alexander-Taylor as Ben.

Ben’s life story is eventful. The son of an American father and British mother, he grew up in New York. When he was 14,  his father died suddenly after which his mother returned to the UK with his two younger brothers and Ben who was sent to an English boarding school. As soon as he could he returned to New York, established himself as a musician, had a long relationship with a girl (“freckled face and eager mind”) and, before he was 30, survived Stage 4 Hodgkin’s Lymphoma – a very serious form of blood and bone cancer.

We start with Ben as a child playing a home-made toy guitar with his musically accomplished, mathematician father who eventually gets the boy a proper guitar and shows him one chord from which the rest develops. The relationship with his father is troubled because Ben fails to live up to expectations and Scheuer senior is very short tempered. He and Ben were locked in an unresolved  quarrel at the time of his death so the boy is wracked with guilt and feelings he doesn’t understand. And those feelings are later threaded through the love for Julia and the cancer as we watch, and listen to, Ben unpicking his emotions.

Effectively a musical monologue, this show has some very beautiful songs especially the loving one about how Julia makes him laugh. Alexander-Taylor is perfectly cast. He is an accomplished guitarist (the five instruments on stands behind him are the only props). We are way beyond anything like strumming and the “three chord trick”. He uses plectrum and/or plucks the strings like a harpist to create some complex rhythms and riffs. He plays a lot of melody – often in chords as a pianist would. His high tenor voice does wistful sweetness well and his diction is very clear. He uses an English accent except when he is voicing an American such as his father. It’s a very balanced and impressively sustained 75 minute performance.

He’s also unflappable. Because Lion is performed on a small, intimate thrust stage it makes some use of aisles and the audience is very close. When a  front-row audience member was taken ill on press night, Alexander-Taylor – thrusting his guitar into the hands of a front of house person – was the first to reach him. Once the man had been helped out, Alexander-Taylor simply took back the guitar and continued from where he had stopped, almost without missing a beat. What a pro! 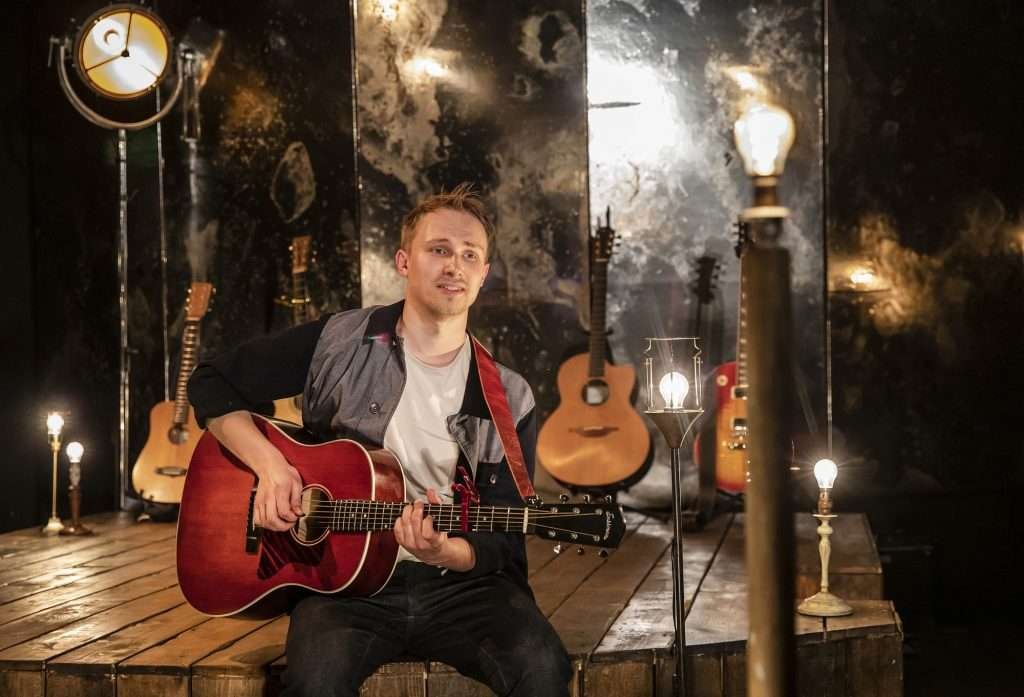 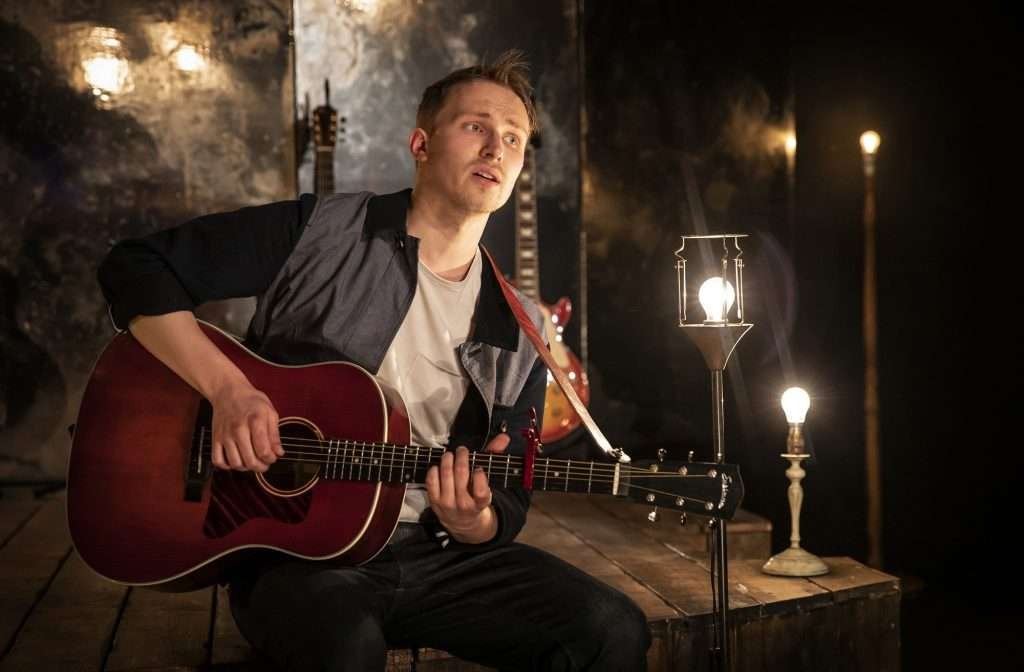 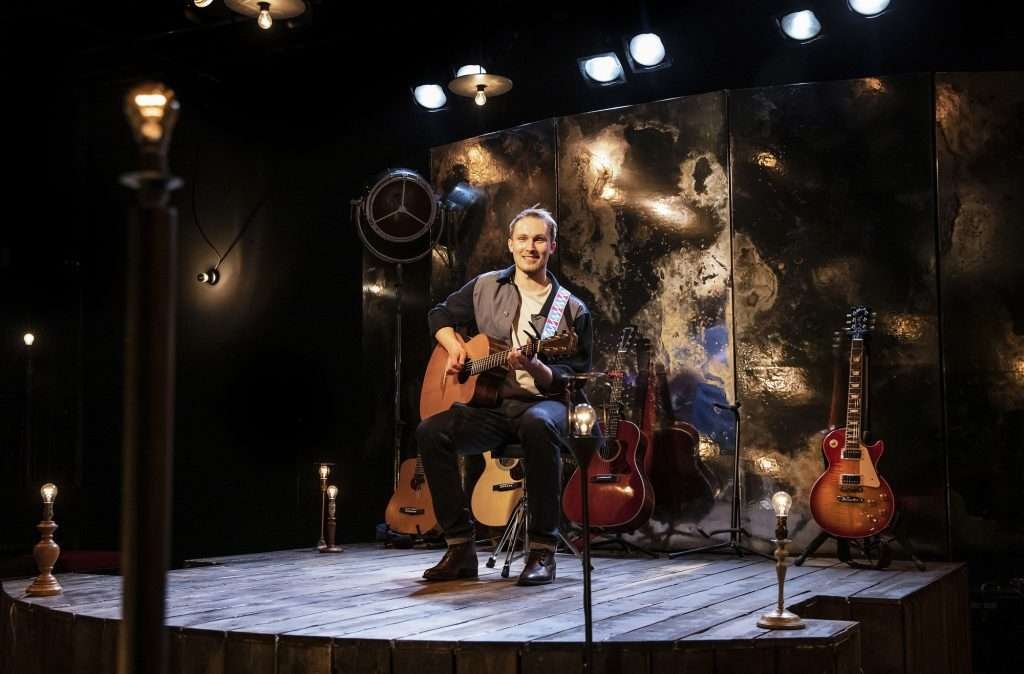 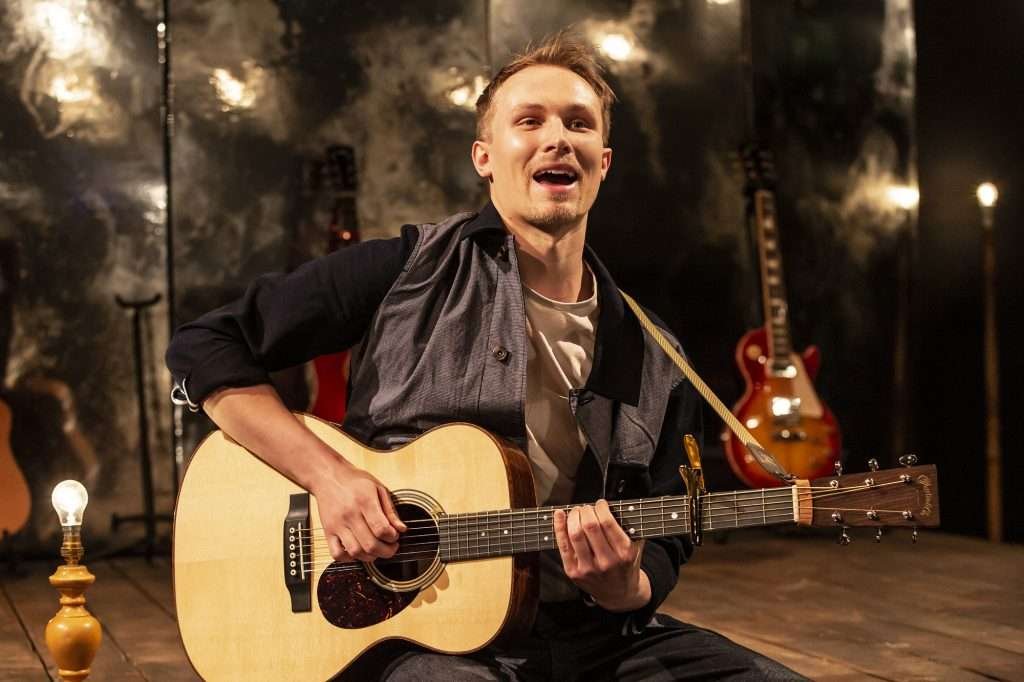