Most people get it. I’ve written before about the kind consideration My Loved One – Ms Alzheimer’s glowering menacingly over his shoulder –  routinely gets from total strangers but it’s so very striking that I make no apology for returning to the subject.

Seats are readily vacated on buses and trains and there’s a lot of courteous standing back as soon as they spot that MLO is shaky on his pins – which, just to make sure, I routinely signal to all and sundry by saying clearly “Mind this step” or “Hold on to me” which is as much for those around us as for MLO himself.

On one occasion the tube train was very crowded. I managed to lever MLO into a priority seat but stood, “strap hanging” (as we used to call it) near the door myself. Inevitably lots more people got on and stood between him and me so I started to worry about how I was going to get him off when we reached our station. In the event I managed to weave an arm through the bodies. MLO got the message and reached towards me. Then the crowd miraculously moved, like a mini parting of the Red Sea, so that I could haul him out. All done in typically British silence of course  – apart from my saying thank you –  but so thoughtful and decent. I suppose it’s the same mentality as pulling over for an ambulance.

On our recent trip to the US we explored Arlington Cemetery (both interesting and powerfully poignant) via a hop-on hop-off bus tour of the site. MLO is no longer proficient at hopping and had to take the three steps on and off the bus very carefully – usually with me standing at the bottom to proffer a steadying hand. When we reached the place where they do the changing of the guard at the tomb of the unknown soldier (the only bit of the whole holiday MLO now remembers with clarity, by the way) there was a big brawny twenty-something in front of us. He was covered in tattoos and wearing a base ball cap which in another life might have made me leap to unreasonable, stereotypical conclusions. In fact, he bounded down the steps before turning to help MLO with exquisite courtesy. I was almost as moved by that as by the changing of the guard which, for the record, I thought was a rather repetitive 3* piece of theatre. Good to see “vets” in wheelchairs brought from all over the US by charities to witness it, though.

I am also impressed by the cheerful kindness of the people who provide “special assistance” at airports. The pleasant, chatty, caring young woman who was awaiting us with a wheelchair at the aircraft door in Washington took us all the way through immigration, baggage reclaim, customs, on an airport “train” and right out to a taxi outside. By then – maybe 45 minutes in her company – I’d heard her entire life story (grandmother in California with Alzheimer’s) and felt really welcome in her country. Yes, I know that’s her job but she clearly takes real pride in it and she earned every cent of the $5 I tipped her. The service is kind enough at Heathrow too but less efficient and with a lot more hanging about because, I gather, it’s “outsourced”.

Needing the loo frequently and urgently is an ongoing problem. In one coffee shop there were two unisex lavatories but one was out of order. I got the code number for the door from the counter and told MLO about six times what it was but he still came back to me inarticulate with panic. So I went round to said door and punched the number in myself. Of course it was occupied and there was, anyway, a woman waiting. “Well it’s a queue” I said. “You’ll have to stand behind this lady and wait.” She spotted the problem instantly: “No no, you go first” she said warmly. “What a star. The vast majority of people are fabulous. I rest my case.

Then there are other people’s perceptions of me and how I deal with it. Back in London we went to Next the other day where Costa is on the first floor and we decided to go up for coffee or , in my case, tea. Well I expect there’s a lift but I really do believe I have to keep MLO moving for as long as possible. When we’d finished our drinks we set off slowly down the steps with me, as usual, walking two steps in front holding his free hand firmly. We were watched by the fascinated security guard at the foot of the staircase by the main door. “I wish I had a wife as kind as you” he said, going on to inform us that his wife had left him and taken most of his money. Life with Ms Alzheimer’s certainly triggers some strange conversations.

When I was at school we didn’t have assembly. The whole-school morning gathering was unequivocally called “Prayers”. And once we were there, our deeply Christian headmistress regularly addressed her Almighty in these simple supplicatory words: “Help us to be kind”. Well I have no truck with her God but by golly she was right with that thought. Kindness is probably the most important factor in human behaviour. If we are kind to each other we can cope with almost anything. 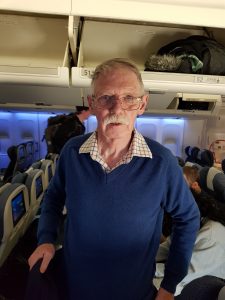